Unlocked vehicles and unsuspecting mailboxes apparently presented too big a target for thieves and vandals to ignore ovrnight in Greencastle. 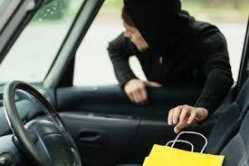 The Greencastle Police Department reported Friday that it is investigating more than a dozen thefts in which residents' unlocked vehicles were rummaged through and items such as car cell phone chargers and loose change reportedly taken.

Reports about damaged mailboxes and entered vehicles were still coming in Friday afternoon as an apartment resident along Wood Street discovered about 2:30 p.m. that her car had been entered and the contents of her glovebox strewn about the vehicle.

Most of the incidents reportedly took place in the area surrounding the National Guard Armory and near Greencastle High School, City Police said.

Anyone who has any information concerning possible suspects is asked to contact the Greencastle Police Department and ask for Det. Seipel at 653-2925 or 653-3155.