The Putnam County Museum's newest exhibit will focus on artifacts and stories from the Masonic lodges across the county.

The exhibit will open at 11 a.m. Saturday, Aug. 29 and run through the end of the year. 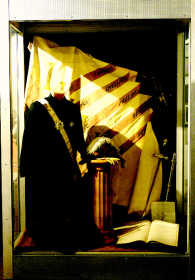 A York Rite uniform, chapeau and ceremonial sword worn by Lewis Edward Neier of the Cloverdale Masonic Lodge at the turn of the 20th century on display at the Putnam Coutny Museum.

The first fraternal society in Putnam County was Temple Lodge No. 47, organized in 1842. Other groups represented are Morton Lodge, York Rite and Roachdale Lodge.

One of the oldest artifacts to be displayed is a sculpture of Masonic symbols carved from pieces of firewood at Andersonville Prison during the Civil War by a Hoosier Mason held as a prisoner of war.

Also on display will be historic furnishings, uniforms, icons and documents dating back to the 19th century.

Shaw, who coordinated the collection of artifacts from several lodges across Putnam County, said state-level representatives from Grand Lodge in Indianapolis and Masons from other counties are planning to attend.

More information is available at www.putnamcountymuseum.org and at 653-8419.