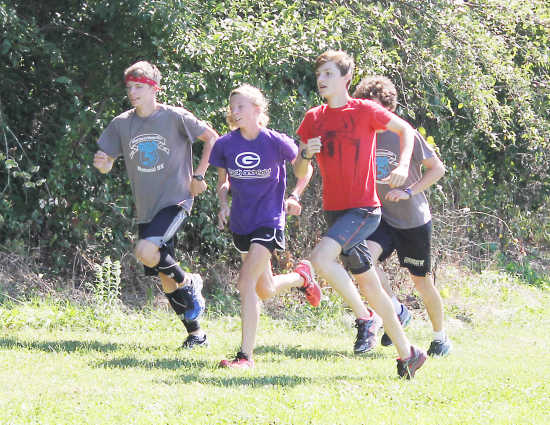 GHS hopes to raise $2,500 to pay for new warmups and T-shirts. (Courtesy Photo)

There are no handouts in the Greencastle High School cross country team.

Coach Garry Anderson makes sure of that.

While the veteran coach has an excellent rapport with the runners more than 50 years his junior, it's never been because he made it easy on them.

"Coach has always told these kids that your have to work for everything," cross country parent Joy Pershing said. "There are no handouts."

Taking that lesson a step further, when the teams set out to raise funds for new warmup suits and team T-shirts, the idea was never to simply ask for money.

Instead, the GHS cross country teams will host their inaugural run-a-thon from 3:30-5 p.m. Tuesday, Sept. 1 at Big Walnut Sports Park.

Each of the 21 team members will run as many laps of the Sports Park as they can in those 90 minutes, raising money as they put in the miles.

The team is looking for community members and businesses to sponsor them per lap so the more laps they run, the more money they earn.

"We're proud of the kids on the team," Pershing said. "If there are businesses in Greencastle that will fund us, we'll run for their money.

"It gives the kids something to work toward while getting in their practice."

While she is working closely with Anderson to organize the event, Pershing is spearheading the fundraising effort. Anderson calls the event "Joy's baby," when talking about the energy Pershing has put into organization.

With a goal of raising $2,500, Pershing is hoping those efforts pay off for the teams.

A big portion of the money raised will go toward buying warmup suits for the 14-member boys' team. The girls' team was able to purchase warm-ups in a recent season, so there is not yet a need.

Additionally, organizers hope to buy team T-shirts for all members, boy or girl.

Any additional funds will go back to the runners in the form drinks and water bottles when tournament season arrives later in the fall.

"Any extra funds we have is more that we could give back to the team," Pershing said.

Anyone interested in supporting the effort may contact Pershing at 721-3162 or by stopping in to Pershing & Company CPAs, 100 N. College Ave., Greencastle.

Individual runners can be sponsored per lap. Flat donations will also be accepted.

Awards will be given to the runner who puts in the most laps and who raises the most money.

Pershing is hoping to make this an annual event that continues to generate money for the program and gives the kids another event to strive toward.

"We want to make it a fun event for the kids to look forward to each year," she said.