NPHS, Clovers still trying to get into swing of season 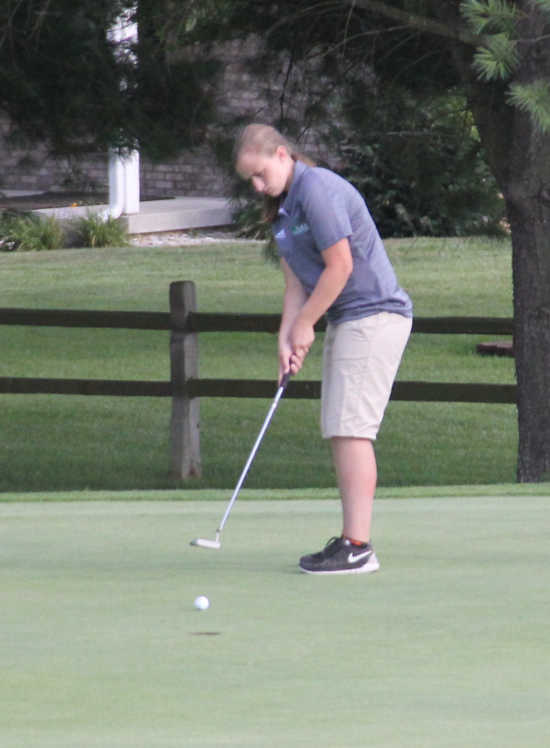 Abby Walker putts one in on her final hole of the day. Walker shot her career's best with a 45 Tuesday. (Banner Graphic/JAY LOCKETT)

With just a few days before the new WIC conference girls' golf tournament on Saturday, the Lady Cougars are still struggling to find ways to quickly improve their scores and become more consistent in their game.

"The two newest players are gradually improving and are beginning to understand that there is more to golf than just hitting the ball," NPHS coach Linda Patrick said. "Learning what club to use when, different stances for a certain club, risk taking, strategy, rules, etc., can all become overwhelming to a beginning player."

The Lady Cougars recently played in the Western Boone Invitational but did not post a score due to having only three players. On Monday, the Cougars hosted a three-way meet with Cloverdale and Owen Valley.

Owen Valley took first with a score of 207, Cloverdale arrived without its No. 1 player, Abbie Speas and carded a 229 and the Cougars struggled throughout the meet with putting and posted a 251. They will play Thursday at Danville.

Cloverdale took another crack at the links Tuesday, this time at home against Plainfield and Monrovia. Plainfield earned the victory with 165 and Monrovia got second with 200. While CHS finished third, shooting a 232, coach Matt Langdon was impressed by his golfers who again were without Speas.

"We did have one out tonight but Abby Walker has played No. 1 the last couple nights," Langdon said. "She shot a 45 which is a career best. We have really good competition from the next girls all the way down to seven."

The Putnam County Tournament will be played on Cloverdale's back nine which Langdon explained was a more difficult course than the front.

"It's just a lot of water," Langdon said. "There are a couple holes that carry and a lot of holes that you can get some penalties on. It's an advantage because we get to play it all year long. So I talked to the girls about taking practice rounds more seriously because it can be an advantage."