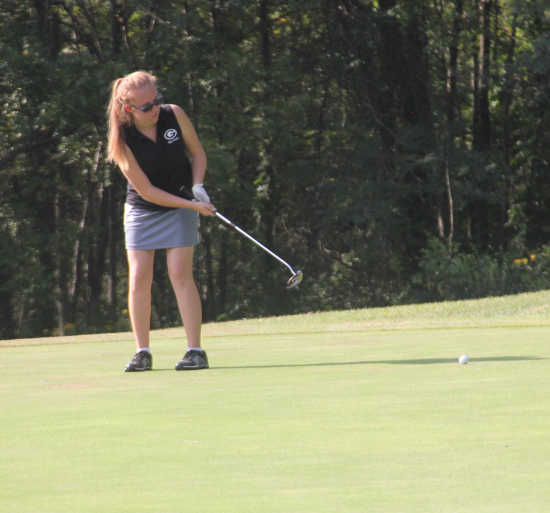 "I was really proud of the girls today," GHS coach Robert Hedge said. "They shot a 405, which is 21 strokes below our average. We struggled with putting on the Creek greens, but we hit the ball very well."

While South Vermillion took first-place honors in both individual and team play, North Putnam finished with a complete score for the first time in 18-hole play netting 514.

"Congratulations to Lokysa and Macey for making All-Conference in our first year of being in the WIC. Lokysa shot a 93 for fourth place and Macey tied for ninth with a 96."

South Putnam's Alicia Haywood also made the All-Conference cut with her score of 96 while her teammate Kristi Wood earned a 140.

Kevin Metz could not be reached for comment but has said that he was pleased with the progress his golfers have made over the course of the season.

North Putnam hadn't yet taken a complete team into an 18-hole meet but against Western Boone earlier this week three of the four players got to experience what it was like.

"The Cougars didn't know what to expect going into their first WIC tournament as they don't play many of the WIC schools in regular season play," Cougar coach Linda Patrick said. "This made it difficult to judge what a good score would be coming out of it."

Patrick said the team was more relaxed playing alongside Greencastle and South Putnam players, making the WIC feel more like a home meet.

"The Cougars became more comfortable about these thoughts when they learned they would be playing along side with Greencastle and South Putnam," Patrick said. "Making it feel more like home, the girls relaxed and were all able to score lower than against Western Boone on a more difficult course."

Cloverdale was still without Abbie Speas and its three golfers put in a good showing with Abby Walker shooting a 109. Hannah Nichols shot a 122 and Ambrie Kidder shot 139.

"Abby Walker did a good job putting together a good second nine, giving her some confidence to play well there next year," CHS coach Matthew Langdon said. "With a young team it was good experience for them to get used to the new conference format and a new course. They look forward to returning next year with some new goals."