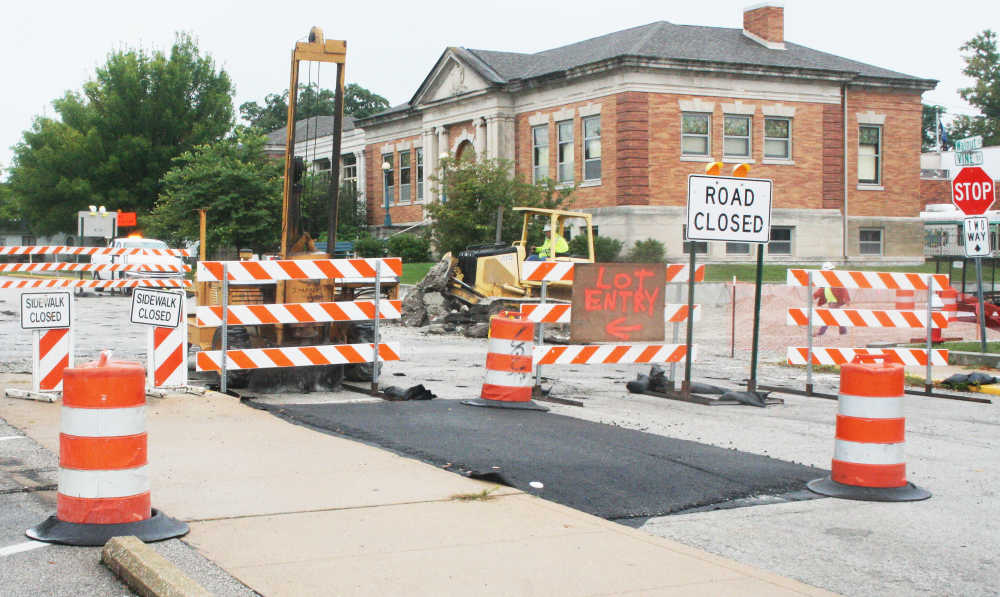 Walnut Street at Vine was closed Friday morning in Greencastle so that work on the Stellar Project streetscape rehabilitation of Vine Street could commence in the northernmost section between Walnut and Washington streets. That meant that the entrance to the Vine Street parking lot was cut off, so a temporary asphalt ramp off Walnut Street into the city parking lot was poured Friday morning to allow access into and out of the lot. The intersection closure at Walnut and Vine could last as long as six weeks as construction is completed, Mayor Sue Murray told the Banner Graphic.

It was spitting rain. Construction had infiltrated the intersection. Traffic congestion evolved. And parking was at a premium.

The perfect prescription for frustration.

So went the first few hours Friday of the most-dreadedly inconvenient portion of the Vine Street streetscape project in Greencastle.

Better get used to it.

After all, that scenario could be the norm for the next six weeks.

At least part of the parking lot issue was solved Friday morning as a temporary asphalt ramp was created from the north side of Walnut Street into the southeast corner of city parking lot.

The overall project keeps progressing as earlier this week the first coat of asphalt was put down in the Vine Street corridor between Seminary and Poplar streets.

The work between Walnut and Washington will make up the majority of the final phase of the project, which calls for substantial completion by Oct. 26.

Meanwhile, in another Stellar-related report, Mayor Murray told the City Council this week that only one bid was received on the downtown loft project.

Numerous construction firms, including some local contractors, had expressed interest in the project, so receiving only one bid was "very disappointing," the mayor said.

As part of Stellar effort, the project was similar to the downtown facade work in which grants covered 90 percent of the work with property owners putting up 10 percent.

But with the one and only bid coming in above engineering estimates, the loft project will now go "back in the hands of the folks who own the buildings," Mayor Murray said, "to see how they want to proceed."

Property owners' costs would have to increase to cover the overage in the bid, the mayor said.