For the art song lovers in the area, the DePauw University School of Music Faculty Select Series continues on Monday, Sept. 14 at 7:30 p.m. in the Green Center's Thompson Recital Hall with a collaborative performance of Franz Schubert's landmark song cycle "Die schŲne MŁllerin," based on poetry by Wilhelm MŁller.

Tenor soloist Kerry Jennings and pianist Amanda Hopson, faculty members with the School of Music, will be joined by Inge Aures, professor of modern languages, to present this timeless folk story of a young miller and his nature-filled journey into love, jealousy and despair as the fair miller-maid (or MŁllerin) with whom he has fallen in love choses between two suitors -- the flour-covered miller and a more virile hunter. No spoiler alert needed to know how the story turns out. 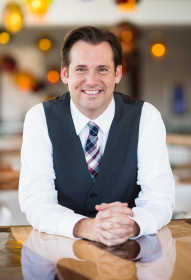 As Jennings and Hopson perform the cycle, Aures completes the tale with dramatic readings of the unset prologue, epilogue and three poems from MŁller's original writings, which even critics admitted contained a kind of innate musicality. A quality that would inspire a later setting by Schubert.

What makes the cycle a landmark is the originality of the form. The collection grew out of a literary game that MŁller's salon of German friends engaged in through creating narrative stagings of poetry and song called Liederspiel. With the friends assuming all the various roles, MŁller was destined to play the part of the young miller, identifying the writer's voice closely with the central character. Schubert, looking to produce songs on a grander scale, was drawn to MŁller's work, transforming the dramatically linked songs into a full-length song cycle.

The poet longingly wrote, "...my songs lead but half a life, a paper existence of black-and-white until music breathes life into them..." Both the writer and the composer died young, less than a year a part and likely never knowing that their work lead not only to creation of a new genre, but also what some consider its finest example. Join the DePauw performers as they bring to life this timeless story.

General admission tickets to Faculty Select Series concerts are $5; tickets for seniors, children and all students are free. For more information and online purchases, visit www.depauw.edu/music/tickets.

To obtain tickets or passes in person on any weekday, stop by the School of Music main office, located within the Green Center. The GCPA box office will also be open beginning one hour prior to the performance.