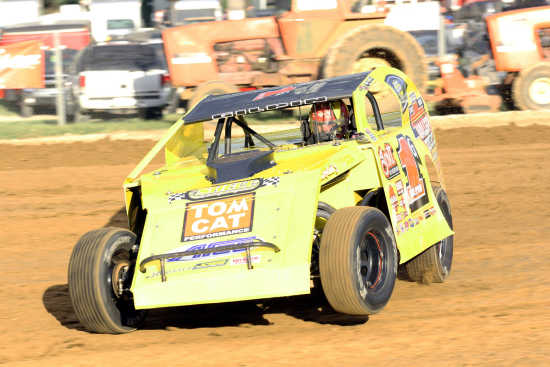 Devin Gilpin carries a full head of steam through turn three on his way to a victory on Saturday night. (Banner graphic/CAREY FOX)

PUTNAMVILLE -- Saturday night provided the clincher for the season long points battles in all four classes at Lincoln Park Speedway and there was a fair measure of drama as drivers made their final case for a championship.

The closest battle overall came down to a three-way scrum for the UMP Modified title at LPS as Dan Lewellen, Kenny Carmichael Sr. and Jay Humphrey were all in the mix. However, after coming into the night third in points, Humphrey claimed a third-place feature finish that propelled him to a one-point margin and the championship over Carmichael, who placed seventh in the A-main, one spot behind Lewellen.

Devin Gilpin got past Humphrey after an early restart and powered away from the field to win his 34th feature of the season as he chases the UMP National Championship. He's currently sitting second behind Illinois driver Mike Harrison. Tim Prince placed second in the feature ahead of Humphrey, Cullen Goodman and Roger Mills. Lewellen was sixth ahead of Carmichael Sr., Roy Bruce, Carmichael Jr. and Gary Hayden.

In the sprint car division, Chad Boespflug hopped into the Krockenberger-owned No. 21k as his regular car was on the sideline for the weekend. Chasing Scott Hampton in the points race, Boespflug nearly made the move count when he was able to score a fourth-place finish in the feature as points leader Scott Hampton worked his way forward after starting 14th to ninth. The final result was that Hampton held on to the title by a scant one point.

In feature action, Greenfield, Ind. native CJ Leary was in a rocket ship all night as his family owned No. 30 started outside of the front row and he didn't look back in recording his second win of the season at LPS. Brent Beauchamp advanced from sixth to place second ahead of Max McGhee, Boespflug and Shane Cockrum.

The final points battle came down to a challenge between Coatesville's Josh Settles and North Salem's Ryan Freeland. Neither driver had much luck in the last race of the season with Settles finishing 18th and Freeland in 17th. Settles would claim the points championship by 26 points over Freeland with Jordan Almanza back in third-place.

Tyler Neal picked up the first bomber feature win of the night in an entertaining battle with RJ Pruitt as Almanza came home third followed by Carlos Bumgardner Sr. and Scott Crouch. Chucky Walden held off a furious challenge from Barry Hicks in the second bomber feature with 40 competitors on hand Saturday evening. After winning last week's race, Josh Litton was third ahead of Raymond Funkhouser Jr. and Larry Hutto.

This weekend will be Champions Night as drivers will be honored for the season as sprint cars, modifieds, super stocks and bombers will be in competiton.