Snyder leads Trio at Music on the Square 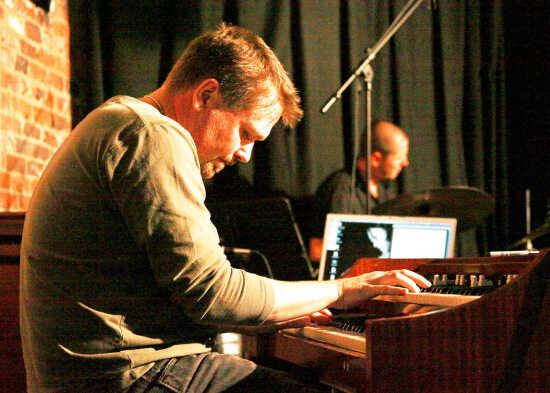 DePauw jazz director Steve Snyder will be joined by guitarist Dave Stryker and drummer Jason Teimann at the Faculty Select concert at Music on the Square at 7:30 p.m. Tuesday, Sept. 15. (Courtesy photo)

The first Faculty Select Series concert to be given at Music on the Square, the new community music center in downtown Greencastle, will feature DePauw University School of Music faculty artist Steven Snyder on Hammond organ, along with internationally known guitarist Dave Stryker and drummer Jason Tiemann in a performance of original compositions and favorites from the organ trio repertoire.

The audience will also enjoy multimedia interaction during the 75-minute program, to be performed "in the round" with the instrumentalists in the middle of the space, giving the audience a 360-degree view of the band's performance. Doors will open at 7 p.m. on Tuesday, Sept. 15 with the concert beginning at 7:30. Afterward, all are invited to linger for a meet and greet with the performers.

Guest guitarist Dave Stryker has recorded 23 CDs as a leader to date and many more as a featured sideman with Stanley Turrentine, Jack McDuff and many others. Gary Giddins of the Village Voice calls him "one of the most distinctive guitarists to come along in recent years."

Tiemann, a New York City-based jazz drummer, maintains a busy schedule as a freelance performer and educator. He previously taught for 12 years at the University of Louisville, where he was professor of jazz drums and percussion, and has performed and/or recorded with Benny Golson, David Liebman, Harold Mabern, Eric Alexander, Mike LeDonne, Peter Bernstein, Slide Hampton and countless others on the New York scene.

In addition to directing the DePauw Jazz Ensemble, Snyder's work as an organist and pianist is documented on 17 recordings found on various independent releases over the last 20 years. He has performed or recorded with Randy Brecker, Jerry Bergonzi, David Liebman, Robben Ford and many others.

General admission tickets to Faculty Select Series concerts are $5; tickets for seniors, children and all students are free.

To obtain tickets in person, stop by the School of Music main office on any weekday, or at Music on the Square 30 minutes prior to Tuesday's performance.