Big weekend ahead for county football 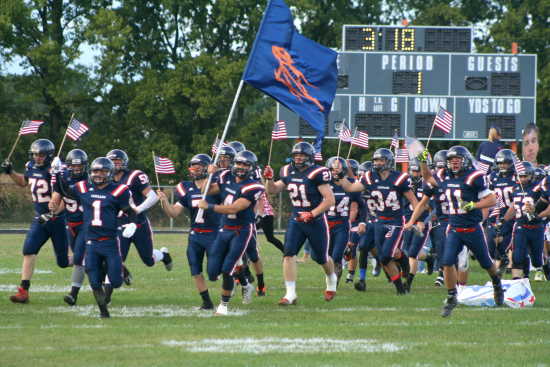 This week marks the fifth game of the season for the area teams. A cross-county rivalry, a homecoming and a chance to snap a losing streak all stand out from Friday's balmy weather.

With seven wins in four weeks between the two foes, the Cougars from the north will play host to the unbeaten Eagles from the south in arguably this weekend's most anticipated match up.

South Putnam junior Kyle Shaffer has been chewing up big yardage on the ground this season for the Eagles. An impressive 1,420 yards have been earned on the tundra with Shaffer contributing 876 (or 62 percent).

Shaffer's 13 touchdowns give him an average of more than three per game while managing to rack up 355 yards in the process. Three of Shaffer's scores came last week at home against Greencastle.

In the backfield for the Cougars is what has been a consistent tandem of versatile backs who are capable of making big plays. Sophomore Ethan Christy leads the way with 35 carries for 252 yards and four touchdowns on the season.

Splitting time with Christy has been senior Bradley Hodges, who's seen 34 carries and two touchdowns while picking up 210 yards. The other six rushing touchdowns have come from sophomore quarterback Hayden Rudes (3), sophomore Chris Murray and seniors Kyler Jeter and Blake Everts.

With the statistics lining up nicely on paper, only time will tell which of these Putnam powers will come away with a cross-county victory. The game is slated for a 7 p.m. start at North Putnam High School.

The hometown Tiger Cubs will hold its annual Homecoming game Friday against the visiting Cadets from Cascade while looking to come back from a 40-14 loss last week to South Putnam.

Although Greencastle saw a tough week-three defeat, junior quarterback Nick Costin still managed to put up 108 yards and a touchdown while averaging just more than nine yards per toss. Junior running back Devin Clar ran for 132 yards and a touchdown as well, proving the Tiger Cubs won't be shut out.

Defensively, Greencastle has seen an average of 78 tackles per game for a county-best and has gotten to the quarterback 12 times this season. Adding three interceptions have been senior defensive backs Alex Hanks (2) and Chase Chew.

With five touchdowns on the ground and six in the air this season, fans will have to wait and see which path coach Mike Meyer and his Tiger Cubs take this week.

The game against Cascade is set for 7 p.m. at Greencastle High School.

The Wildcats from South Vermillion will be heading to Cloverdale on Friday for a Western Indiana Conference battle between two non-divisional teams.

South Vermillion lies within the conference's western region while Cloverdale sits in the eastern portion. With both teams looking for the first win of the season, Friday will mark a new beginning for one of the two foes.

Cloverdale is coming off a tough 55-0 shutout on the road against Cascade. The Clovers and coach Tony Meyer will undoubtedly look to turn the tide this Friday.

The game is set to begin at 7 p.m. at Cloverdale High School.