Ivyl Lucille Gilstrap of Bainbridge passed away Wednesday, Sept. 16, 2015 at home surrounded by her loved ones.

Born March 12, 1930 to parents Virgil Cline and Ivyl Oreta (Keyt) Ratcliff, she spent most of her youth in the Clinton Falls-Portland Mills-Morton area. 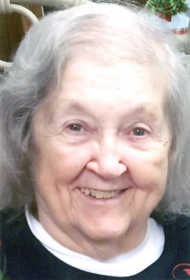 Lucille was baptized at age 11 and was a member of the Clinton Falls Methodist Church.

She attended Morton and Clinton Falls schools and then graduated from Bainbridge High School in the spring of 1948, co-salutatorian of her class.

In June 1948, she married Galen Robbins Gibson and their union produced six children. After a divorce, she married Donald Lewis Gilstrap in 1972, and he survives.

They made their home in Bainbridge where they enjoyed entertaining family, watching the birds outside their picture window, and sharing their mutual birthday each year on March 12.

Lucille considered work important and from high school on held a variety of jobs, waitress at The Duck, factory worker at RCA, customer accounts specialist at Sears, bookkeeper at Herman Davis Chevrolet, and bookkeeper at the Roachdale Elevator. She was forced to retired in 1974 due to a disability.

A wonderful wife, mother, grandmother and sister, she will be greatly missed by all who loved her.

She was preceded in death by her parents, her daughter Lu Phillips, a grandson Kyle Haulk, her sister Betty Ruark, her brother-in-law Roland Ruark, and sister-in-law Bonny Ratcliff.

Hopkins-Rector Funeral Home, Greencastle, is handling arrangements. Visitation will be from 2-6 p.m. on Sunday, Sept. 20 with the funeral scheduled for 11a.m. Monday, Sept. 21 at the funeral home.

Lucille loved flowers or memorials may be made in her memory to the Clinton Township Scholarship Fund or the Bainbridge Improvement Society through the Putnam County Foundation, 2 S. Jackson St., Greencastle, IN 46135.