'Moose' Hecko, five others to be inducted into DPU Athletics Hall of Fame 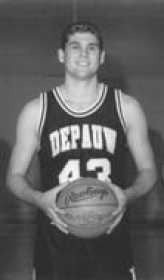 Hecko, who led Greencastle High School on an amazing tournament run to the Final Eight in 1988 when the IHSAA tourney was still a one-class basketball system, remains DePauw's all-time rebounding leader. He graduated with 893 rebounds and is second in scoring with 1,675 points.

Hecko earned Basketball Gazette All-America accolades in 1992 and was the Indiana Collegiate Athletic Conference Player of the Year in 1992.

Crist established a DePauw single-season record with 604 points during the 1989-90 season as he helped the Tigers to an appearance in the NCAA Division III championship game.

A two-sport student-athlete, Ernst earned all-America honors in the high jump at the 2000 NCAA Division III Outdoor Track and Field Championships after finishing in a tie for eighth in the event. She graduated with four school records in track and field and still holds DePauw's outdoor high jump record. As a senior, Broering was named the Southern Collegiate Athletic Conference Diver of the Year.

Cathcart was a linebacker for the Tigers who was second on the team as a sophomore with 77 tackles and intercepted three passes as a senior in helping the Tigers to a then school-record nine wins.

Vogel graduated as the program's all-time leader in points (959) and rebounds (718) and still ranks 18th in scoring and fourth in rebounding. Her 9.1 rebounds per game for her career remain a DePauw record as do her 10.9 boards per game during the 1982-83 season.

The induction ceremony is set for 10 a.m. Saturday, Oct. 10 in Moore Theatre of DPU's Judson and Joyce Green Center for the Performing Arts.

The honorees will also be recognized at halftime of the football game against Wittenberg which kicks off that day at 2 p.m.

The DePauw Athletics Hall of Fame has inducted 190 individuals and three teams starting with the charter class of 25 individuals.