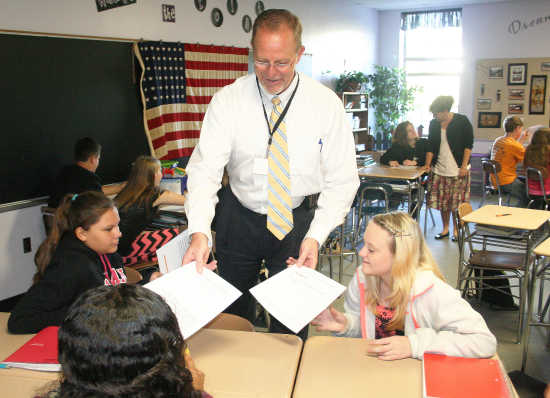 Getting a rare chance to play both judge and jury, Putnam Superior Court Judge Denny Bridges offered Greencastle eighth-graders a glimpse into the judicial process Thursday in celebration of Constitution Day.

Interacting all day with Greencastle Middle School students in Lori Gillespie's social studies classes, Judge Bridges addressed the history of the U.S. Constitution, citizen responsibility and the process of selecting a jury for a court trial.

Calling the U.S. Constitution the most important document written since the Magna Carta, "at least for our country," the judge explained our forefathers thought the notion of trial by jury so vital to our freedom that they included it in the Constitution. 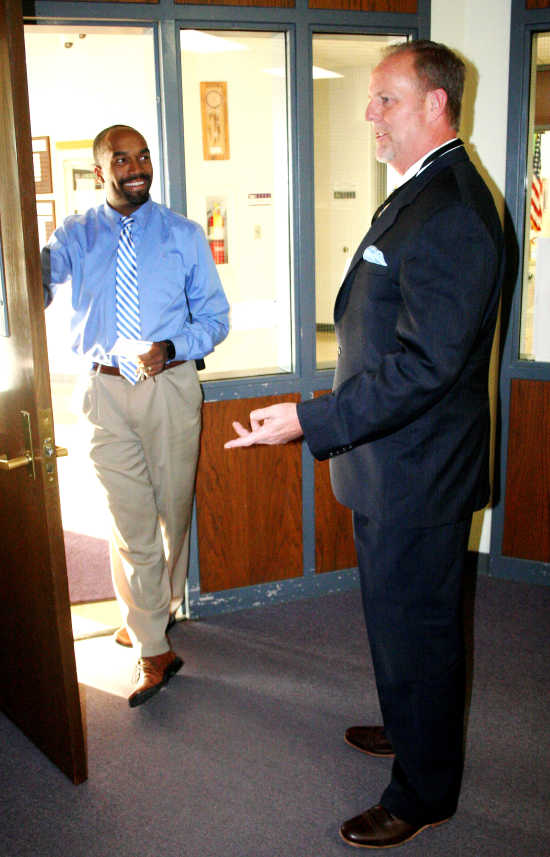 "It was very, very important to the framers of the Constitution," Bridges said, "so much so that it's mentioned four times. It's also mentioned twice in the Indiana Constitution, so it's a huge, basic fundamental right."

And the citizen responsibility of serving as a juror, the judge noted, "falls somewhere between voting and paying taxes ... between something you don't have to do (vote) and something you have to do (pay taxes)," he added.

He told the students that among the certain responsibilities of being an involved American citizen is the responsibility to vote.

"It's not required," he reminded them, "but it's important."

And being registered to vote puts citizens into the overall jury pool (along with registering a car with the Bureau of Motor Vehicles in Indiana).

If citizens are called for a jury but don't show up, Bridges told the eighth-graders, a judge can issue a summons to bring that person to court.

"They can't make you serve (on a jury)," he told them, "but they can make you come and explain why you didn't show up."

A person must be at least 18 to serve on a jury and the only two automatic exemptions from jury duty are being on active military service and being over the age of 75.

Dividing the class into a jury pool and a quartet of prosecutors and defense attorneys, the judge set up an exercise in selecting a jury, but not before admitting it's rare for a jury trial to be conducted in Putnam County.

The latest judicial figures available (2012 trial numbers), he said, found only five jury trials that year (both civil and criminal cases totaled) in both Putnam Circuit and Superior courts.

Bridges said 99 percent of all criminal cases are decided by plea bargain because "not very many people are willing to take the gamble" and risk being judged by a jury of their peers.

Usually 60 potential jurors make up the available jury pool, and rarely does the court run out of candidates during the jury selection process.

"It used to be," Judge Bridges noted, "that the court could call the police in and have them go down on the street and get one or two (potential jurors) and tell them, 'The judge needs you for jury duty right now.'"

"They take all the fun out of being a judge," he told the middle schoolers who eagerly participated and seemed to enjoy being a part of the educational program.

As one of a group of Hoosier judges recognizing the anniversary of the signing of the U.S. Constitution (Sept. 17, 1787), Judge Bridges took part in a statewide program bringing judges into schools and students to the Statehouse to learn more about the Constitution and how it affects their daily lives.

About 40 appellate and trial court judges and Supreme Court attorneys visited with more than 2,500 students across the state in celebration of Constitution Day. Greencastle Middle School was the only Putnam County school to take part.

Educational materials for the program were modified by Courts in the Classroom (the Supreme Court's education outreach effort) from the Colorado Court's award-winning "Judicially Speaking" program. The Community Relations Committee of the Indiana Judicial Conference is a partner in that outreach project.