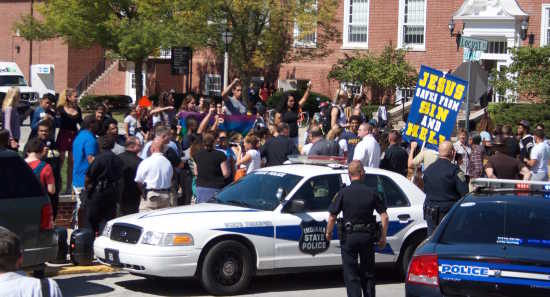 The Terre Haute-based "Bro. Jed's School of Evangelism" stopped by DePauw University on Wednesday, much to the surprise of students and Greencastle residents alike.

By simply listening to a few minutes of the group's message, onlooker suspicions were confirmed as the group soon began shouting its allegations.

In an obvious display of anti-homosexual rights, four of the group's members traveled to Greencastle to further its "Campus Ministry USA" campaign from its Terre Haute headquarters -- the Church of Ministry -- including leader Brother Jed Smock.

Jed and his cohorts shouted slurs to students and passersby, calling women "whores" and men "evil," amongst other slanderous statements designed to incite a reaction -- peaceful or otherwise. 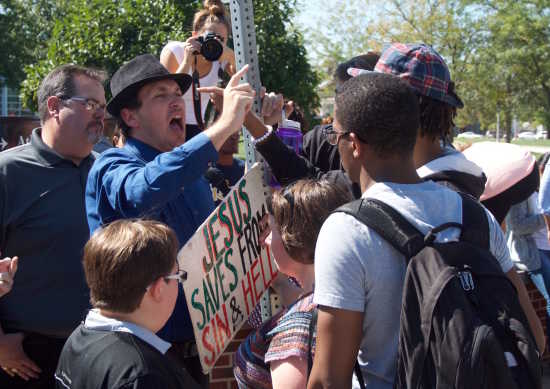 Two students were briefly detained after one was unruly and another allegedly threw coffee on a protester.

Mayor Sue Murray and DePauw President Brian Casey were present and tried to help contain the situation and maintain its peacefulness. Murray said the entire happening was "unfortunate."

"This is not a place for interested and productive dialogue," Murray said. "I think this is an opportunity for someone who wants to be heard -- a group that wants to be heard. What they're displaying is completely the antithesis of what many of our students feel at this time."

President Casey described the group as "inciting student reaction with a message of hate."

"Right now they are allowed to (do so) because they are on public property," Casey said. "We have a lot of students gathering and we're just monitoring this for the safety of our students. The students are obviously communicating back and exercising their right to freedom of expression." 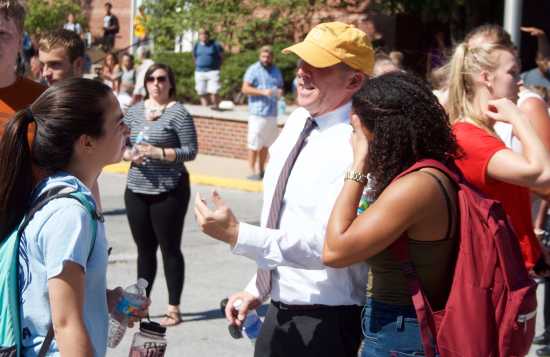 Asked what could have provoked such a presence, Casey replied, "We have no formal message from them."

DePauw was simply the latest in a string of recent protests. Next up -- Indiana University today and Purdue University on Sept. 25, according to the group's website.

Reports indicate the DePauw Campus Security department received the initial call at 11:50 a.m. followed by a call to GPD at noon. The police departments initially believed the group was from the infamous Westboro Baptist Church out of Topeka, Kan. 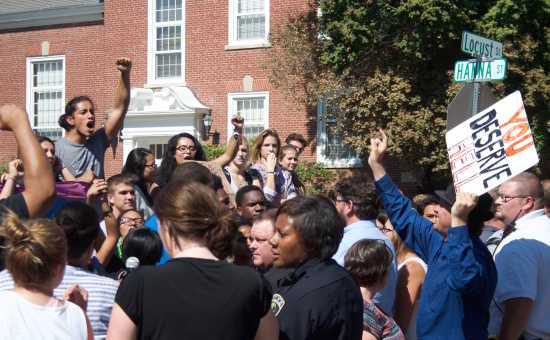 DePauw students eventually trumped the protesters by sheer volume, using chants, loudspeakers and music until nothing else could be heard. (Banner Graphic/NICK WILSON)

However, tensions eventually flared as students rallied in number and strength, overpowering their agitators with loud music and chanting. Cries of "I believe that we will win" and "black lives matter" could be heard radiating around the corner of Hanna and Locust streets.

After approximately two hours of picketing, shouting and commotion, the activist group was finally escorted to its vehicles by police and students resumed their normal schedules.