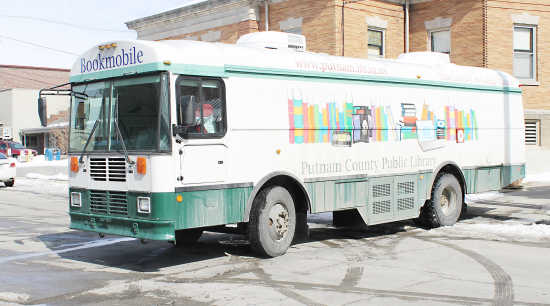 The Bookmobile may soon be for sale after the Putnam County Library Board voted to transfer the title to the Friends of the Library. (Banner Graphic/Jared Jernagan)

Putnam County Public Library Director Grier Carson said the library is limited in how to get rid of the decommissioned Bookmobile.

The decades-long service was officially discontinued in March per a unanimous vote of the library board. For more than 50 years, the Bookmobile would be stocked with reading material and make stops throughout the county to allow patrons to peruse.

The large bus was recently replaced by a smaller, safer and more fuel efficient 2015 Chevrolet City Express LS. Driver Jill Hawk now stocks the van with books reserved by patrons. She makes her way throughout the county, visits nursing homes and stops at the local Head Starts.

In order to part with the old bus, the board voted Wednesday to transfer the bus to the library's non-profit arm. Carson said this was within the limited realm of possibilities.

Carson added it will be up to the discretion of the Friends of the Library to do with the bus as it pleases, but will probably sell the bus in an online forum such as eBay Inc.

PCPL will be partnering with the Greencastle Civic League to have local artist Amy Welch create a mural on the outdoor concrete wall outside the Imagination Portal.

PCPL board member Lisa McCoy proposed the idea to the library director last month and the planning has started.

"This is a low-cost finish to that space we couldn't afford to do before," McCoy stressed.

Carson said the work is anticipated to start by the end of October, but the design has not been decided. Ideas discussed during the board meeting included a scene from a children's book, an outerspace theme or even a recent youth favorite of Minecraft.

The library will be working with Tzouanakis Intermediate School to provide access to online reading material through the library.

Carson and circulation manager Cortina Ziuchkovski met with Tzouanakis' Shannon Green to get the partnership started so third-grade students can access the OverDrive catalog.

Carson said the initial concern was each student could not be signed up for a library card without parental consent, so Ziuchkovski created a special account where students can access the e-book of their choosing through the teacher.

The partnership in the third grade is just a start, Carson explained. Once they can fight through the bugs, PCPL will start working with more teachers and schools.

As some PCPL staff are preparing for retirement, Carson told the board it was time to discuss the idea of "reference in the 21st century."

"How do we staff the reference area and provide reference out on the floor?" Carson asked the board.

He stressed the board should keep these questions in mind as they move forward and the time comes to replace personnel.

Carson told the board he would like to revamp the Kiwanis Room in the library at some point in 2016 to make it feel as though it could be used for more than a classroom or board meeting.

The small-scale renovation would at least include repainting, cleaning the carpet and getting some new furniture. He said the new furniture should be more versatile to allow it to move around the room for various projects and possibly be used in other areas of the library.

Carson asked if the project should be funded in-house or seek community support. Board president Nancy Zennie said she would not be against asking for community support for the project, but also questioned the practicality of partnering with another entity.

The director said the renovations would take place some time in 2016, so he was in no rush to make a decision.