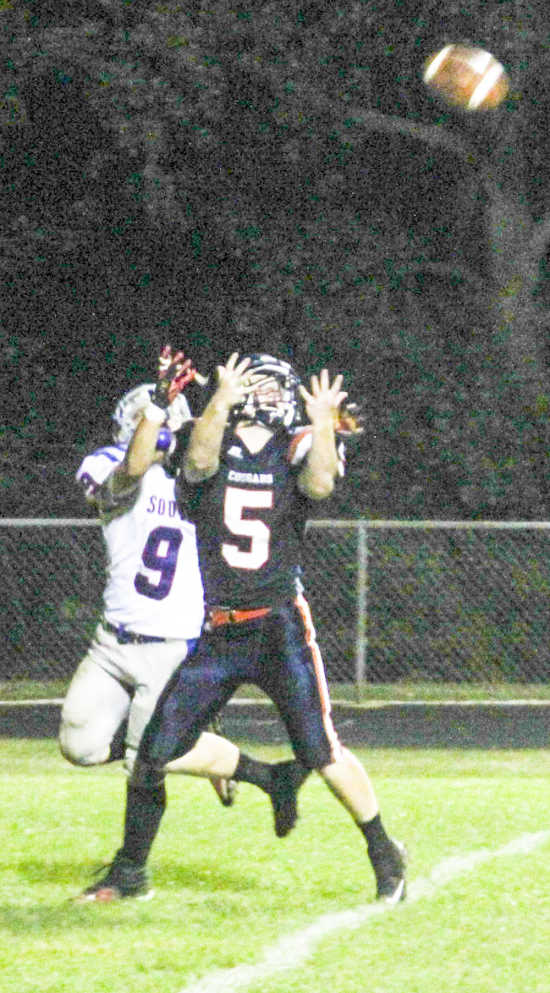 North Putnam's Corbin Judy hauls in a late interception against South Putnam last week. Although the Cougars force no turnovers on Friday, they came up big in a 13-0 shutout of Edgewood. (Banner Graphic/JAY LOCKETT)
Order this photo

ELLETTSVILLE -- The North Putnam defense made certain that two first-half touchdowns were all the Cougars needed for a conference road victory on Friday.

"I thought tonight our defense played really well," Cougar coach Greg Barrett said. "There were a couple of times Edgewood was inside the 15 and didn't score.

"I thought our defensive staff did great tonight," he added. "Those coaches don't get enough credit."

White led the team with 11 tackles, although a number of teammates were close behind.

The coach praised junior defensive back Corbin Judy for another big game, along with secondary mates Cam McPherson and Daniel Huffman.

Admitting more points could have been scored, the coach had nice things to say about his offense as well.

"We did some really good things. Offensively, we left some points out there, but we were really balanced," Barrett said.

Brad Hodges followed this up with a 14-yard touchdown run.

A drop on another likely TD and a late knee could have added to the total, but the coach was pleased with the performance.

Hodges led the rushing attack with 91 yards on 12 carries.

Rudes had 130 yards and no interceptions on 9-of-20 passing. Haste was his favorite target, with three grabs for 74 yards.

Winners of three straight since a loss to Owen Valley, the Cougars find themselves heading in the right direction as the stretch run approaches.

"I'm real proud of these guys. They know we let one slip away early," Barrett said. "They're kind of hungry for that success. We haven't had it for a while.

"They're playing well as a team right now. As a coach, that's what you want."

The second-place tie in the WIC East will be broken next Friday when the Cougars visit Cascade (3-3, 2-1 WIC). The Cadets lost to Owen Valley Friday by a score of 42-20.