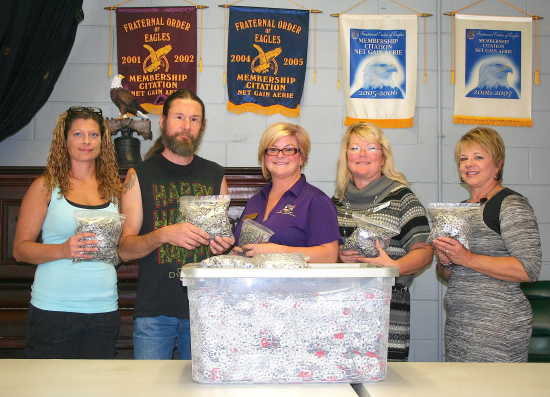 Representatives from both Hickory Creek at Sunset nursing home and the Greencastle Fraternal Order of Eagles get together Monday afternoon at the Eagles lodge to combine their collections of pop tabs. Displaying tabs are (from left) Shannon Hill, Randy Huff, Nikki Hutcheson, Tina Harden and Jill Stott. (Banner Graphic/Nick Wilson)

Greencastle's Hickory Creek at Sunset nursing home, with the support of the city's Fraternal Order of Eagles at Lodge 3488, has taken the initiative to raise money for not only the local community but Shriners Hospital for Children in Chicago, as well.

As part of the nursing home's Health Foundation, a non-profit charity organization, these two groups have put on a display of selflessness seldom seen. Although it took almost six months to collect, the nearly 100-pound bag of aluminum pop tabs will be turned into, according to the Sept. 21 price of 73 cents per pound (found on certified website vincentmetals.com), or a total of $67.89.

And this is only the beginning. Hickory Creek at Sunset Administrator Jill Stott said the groups hope to ultimately collect more than 600 pounds of pop tabs. Stott and the gang (Director of Nursing Tina Harden, LPN Nikki Hutcheson and Eagles representatives Randy Huff and Shannon Hill) want to encourage those interested in donating pop tabs to come to the nursing home, located at 1109 S. Indiana St. in Greencastle to make a contribution.

"Our friend Nikki (Hutcheson) contacted the Eagles to see if they would want to help," Stott said. "We have a 40-pound bag collected already and the Eagles are adding another 40 pounds or so today and the rest are in (zip-lock) bags."

The fundraiser is part of a much larger contest between several area nursing homes. The winning home will receive funds enough to purchase something needed in the facility. Some examples given include a big screen lobby television or various medical supplies.

However, there is one thing that could prove more useful to the home -- something the group has been eying for a while.

"We're also trying to raise money to buy transportation for Hickory," Harden said. "That's something we could really use."

A Hickory Creek at Sunset-specific contest also parallels the region's competition. Although a grand prize yet to be determined, the home has been metaphorically split in half since the beginning of the contest earlier this year. This, Hutcheson said, has become a driving force behind the tab-collection.

"We've collected pop tabs from a lot of different things -- pop, V8, soup cans -- and the Eagles were able to get a lot from beer cans," Hutcheson said. "We'll take any kind of (pop) tab we can get."

Hickory Creek at Sunset and the Eagles will be collecting tabs through the end of the year. Contest results will be announced in January 2016.

For more information about how to make a donation, call 653-3143 or visit hickorycreekhealthcare.org/greencastle.