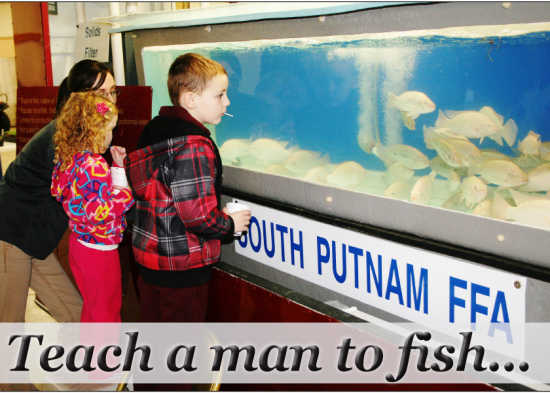 Most high school students appease state standards by sitting in a biology class to learn about animal anatomy, but at South Putnam High School the educational experience goes deeper.

Amanda King teaches a host of agricultural science classes, some of which require the students to ensure more than 2,000 critters thrive in the classroom. Connected to King's classroom is an aquaculture lab which hosts about 2,500 tilapia, 10 bluegill, a crappie and a recently added catfish.

"Instead of using a large livestock farm, we use that (aquaculture lab) to teach the same life cycles -- the process of harvesting, the process of feeding them, cleaning them, nutrition," King explained. "It inspires them to think more analytically, which is something our students are really good at. They really enjoy the science side of stuff. They also have to think about engineering and problem-solving type stuff. If something breaks out there, they say, 'OK, how are we going to fix it?'" 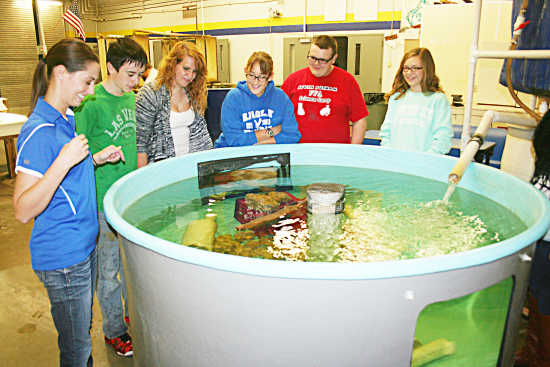 Banner Graphic/Sabrina Westfall
Among the many duties the agricultural science class has to do each day, King said her students most enjoy watching her feed the single crappie in the natural resources tank (left) because it makes a splash. In addition to the nine tanks in the lab, students also work with a small-scale hydroponics system (right), which features several types of plants.

While the main focus continues to be tilapia, King said she tries to keep the learning experience interesting by adding other creatures like the catfish in the natural resources tank.

"They cover all this stuff in biology, but they don't necessarily get the same experience. I like -- and every teacher is different -- to do really hands-on stuff. So this is the second or third time they are getting to do the same information, so hopefully it's starting to sink in," King said. 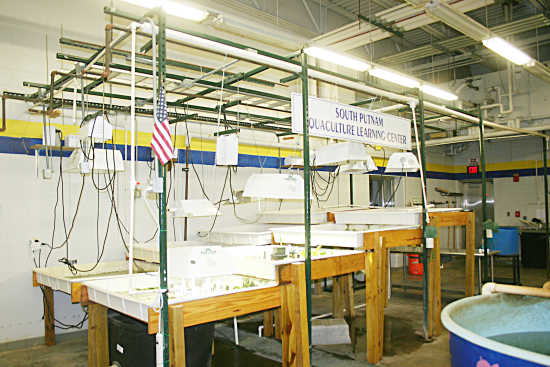 Banner Graphic/Sabrina Westfall
In addition to the nine tanks in the lab, students also work with a small-scale hydroponics system (right), which features several types of plants.

She added bluegill do not live long, so she is preparing to rotate out the fish. Often times, students will go fishing and bring back bluegill to keep the tanks full.

The students work with the tilapia from the earliest stages until time to harvest. At the beginning of class each day, King's students complete a set of tasks including cleaning tanks, spraying filters, feeding the fish and clearing the floor of extra water.

Every two weeks, the duties change to ensure all students get a chance to learn about the innerworkings of the equipment. King said students have to use math skills when it comes to feeding the fish. The students have to calculate 3 percent of the fish's body weight each day to determine the amount of food tossed into the tanks.

Once the tilapia have fulfilled its life cycle, the freshwater fish do not go to waste. Before fall break, students will be in charge of harvesting the fish.

"If somebody wants some, we give it (tilapia) to them and they usually give us some sort of donation. Usually, most of what we do, we freeze and serve at our FFA banquet," King explained.

While many students were not sure what they were getting themselves into when signing up for King's class, they have also come to enjoy the process even if it means not wearing cute shoes in the lab.

"I like the classroom stuff. It's fun for me," Robertson said.

Destiny Gibson said King's class is by far the most hands-on course she has taken, but likes getting to really see what she is learning about.

"Being really girly, some of this is kind of gross," Gibson said with a laugh. "But, I get to see what I'm learning about in real life."

Reagan Ladd said she needed a science class after transferring from Cloverdale, so she was placed in King's class. She did not expect to spend part of her afternoons in a lab surrounded by fish, but she has started to enjoy it.

Savannah McIntosh, who is also a member of FFA, said she hopes to one day work in the medical field and the agricultural science class provides insight into the innerworkings of the body. In addition to the aquaculture lab, the students have worked with a cow's stomach, pig heart and pig lungs.

"In here we get to work with the circulatory and respiratory systems, and that information is useful," McIntosh said.

As for the aquaculture lab, McIntosh said she enjoys being a part of the process from start to finish. The tilapia come in as babies and the students are in charge of every process, including eating the harvested fish at the annual banquet.

She added the students also get to work with the mobile aquaculture unit. Last year, FFA students took the mobile unit to the Putnam County Fairgounds and were able to share their knowledge.

"We got to talk with the fourth-graders and tell them about the fish. Some of them were asking all kinds of questions," McIntosh said.

The aquaculture program was started approximately 30 years ago and King said it is still operating from the original funds donated. As the program continues to thrive, King said she is beginning to seek out additional funding sources, such as organizations in the community or potential grants.