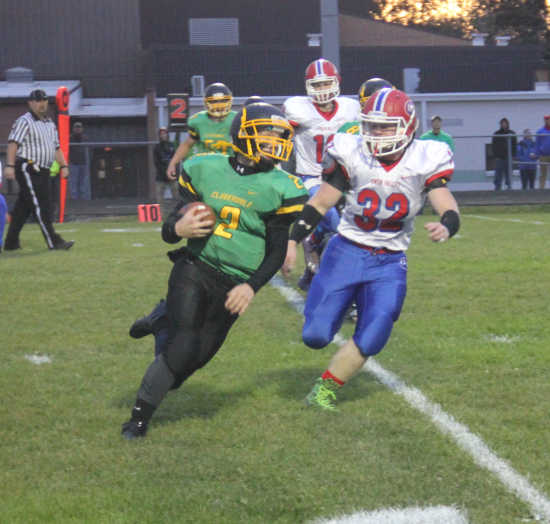 CHS' Parker Watts gets some yardage after picking off an Owen Valley pass in the redzone. (Banner Graphic/JAY LOCKETT)
Order this photo

CLOVERDALE--In a football game where most things went Owen Valley's way, Cloverdale coach Tony Meyer had a positive outlook in the 48-0 loss Friday.

"I think everybody is improving," Meyer said. "I don't think there is a question about that. When we play teams more our size I think it's more evident. I think it's hard when you are going up against a 4A school who is incredibly well coached, with the best line that we've seen all year."

With the Clover offense and defense playing as hard as possible, it was tough for CHS to get any type of momentum rolling.

Cloverdale had a hard time stopping the run game of Owen Valley, however there weren't the anticipated long gashes for the Patriots. Cloverdale held containment and forced Owen Valley to be methodical in each drive.

"The defense is getting more disciplined," Meyer said. "We switched course on defense after the South Vermillion game. I thought we played well at Brown County but it was the first game action we had for that defense. Coming in against Owen Valley, they stuck with it. They were disciplined. We gave up a couple big runs but you'll have that in any defense."

In a first quarter play, defensive back Parker Watts read a pass perfectly and secured the interception, stalling a Patriot drive.

On offense, Watts completed six passes in the game but was hassled throughout the game by a tough defense and never scored the deep pass.

"Parker, I thought he played well but what hurt us tonight is our offensive line," Meyer said. "My thing is, we go for the quick pass. We don't expect four or five seconds. Our motto is give us two seconds and we'll get you a completion. Well tonight it was about 1.2 seconds. It's easy to yell at the offensive line but they were outmanned. So I feel bad as much as I yelled."

"We are getting more disciplined, which is good," Meyer said. "Our only problem is that we got dinged up a bit with Nick Winders who is kind of a backbone of our offense. He knows every route and he is a good one who can fill in at wideout at slot at back side."

Even with Owen Valley pouring it on in the first, the CHS defense came and held the Patriots to just 12 points in the second half.

"The effort, I wouldn't question one kid's effort on that team," Meyer said. "Every player gave everything they had. Sometimes you don't have enough. You know there is always next year and next week. No body was hanging their heads, no body was crying. They were all looking to contribute. That's a good thing."

Due to a players that had not been deemed eligible by the IHSAA Brown County was forced to forfeit its match on Sept. 25 giving CHS its first win of the season.