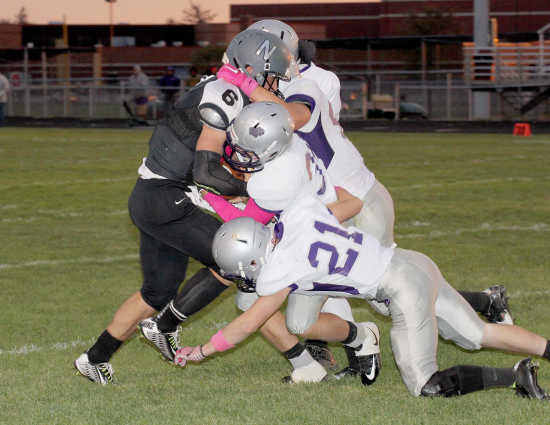 Greencastle's Matt Fajt (No. 21) and a pair of his teammates stack up Northview quarterback Tucker Stewart in the first half. (Banner Graphic/Carey Fox)
Order this photo

The unbeaten Knights came into the contest averaging better than 51 point per game and the Tiger Cubs had difficulty slowing down Northview's high-powered attack. The longest scoring drive that Northview had was six plays, which was in the fourth quarter.

Greencastle actually had some success moving the ball in the first half of the contest. In fact, the Tiger Cubs ran 31 plays to just 15 for the Knights.

However, Northview took the opening kickoff and went six plays and scored on a six-yard run by senior Ben Girton.

Greencastle wasn't able to move the ball on its first drive and was forced to punt from midfield. However, the punt was shanked and the Knights' Levi Riggle scooped the ball up and ran the kick 32 yards for the score and a 14-0 Northview lead just 3:14 into the contest.

Such was the dilemma that Greencastle faced on Friday night.

The Tiger Cubs kept the ball mostly on the ground over the course of the contest and found some success in the second quarter.

Trailing 28-0 to start the period after a 78-yard punt return for a score by Girton, Greencastle began to move the football.

With a first down at the 12-yard line, Scanland powered for four yards, but the drive eventually stalled and ended on an incomplete pass at the 14-yard line.

Northview was able to add another touchdown just four plays later as Girton broke through the line and raced 74 yards for a TD.

Greencastle was able to break its scoring drought before halftime on an eight-play drive that included a 12-yard run by Ummel and a 16-yard scamper by Costin for a first down. Scanland rumbled between the tackles to the Knights' two-yard line to set up Costin for a QB sneak for a score to get the Tiger Cubs on the board before intermission.

Northview's defense clamped down in the second half as Greencastle was able to muster just six total yards rushing and one first down after break.

The Knights remain unbeaten at 7-0 overall and Greencastle drops to 1-6. Northview travels to South Putnam on Friday evening while Greencastle hosts South Vermillion.