By MATT ANDERSON, For the Banner Graphic 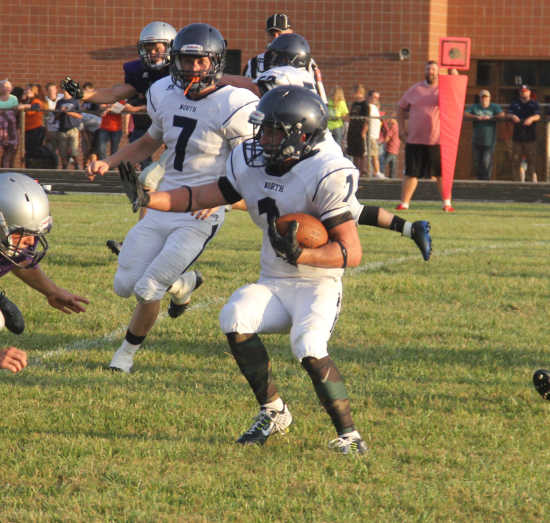 The Cougars (6-1, 3-1) battled for their third Western Indiana Conference win of the season, and North Putnam coach Greg Barrett gave a lot of the acclaim to his defense, as he should.

"Our defense was the reason why we won that game," he said. "To hold those guys to 14 points was extremely positive on our side.

The defense only allowed one score. The other came on an early 83-yard kickoff returned for a touchdown by Zac Butler.

"I thought our D-Line got a good push, and our linebackers fielded extremely well," Barrett said.

North Putnam started the game on the right foot, forcing Cascade into a three-and-out and then scoring on their first drive. On solid field position, quarterback Hayden Rudes rushed the ball in for two yards -- his first of three scores on the night. A failed two-point conversion gave them an early 6-0 lead.

The kickoff return erased the lead quickly, but the Cougars got it back with another short touchdown run by Rudes. However, a late 27-yard touchdown pass by Cascade gave them a 14-12 lead at halftime.

The second half was all North Putnam. The rain started to come down on what was already a cold and windy night, forcing the Cougars to go to the ground more often than they would have liked, but it got the job done.

Rudes attempted just three passes in the second half and finished 5 for 9 with 38 yards.

"In the second half we kind of let the weather dictate what we were doing," Barrett said. "Our passing game wasn't anywhere where we want it to be tonight due to the weather. So, everything we got tonight we were excited about."

Bradley Hodges took control of the running game. He finished with 142 yards on 26 carries.

"He was running hard," Barrett said. "Kid's got a motor and keeps on going."

Another touchdown run by Rudes gave them the lead at 18-14 with 3:17 left in the third quarter. The defense, meanwhile, did their part. They forced Cascade in the second half to three punts and two late interceptions -- one by Bobby Scheele and the other by Cameron McPherson.

"Bobby Scheele getting the interception off the screen was huge for us," Barrett said. "That was a game changer right there. Bobby is a player. He's all over the place, and he did a good job at center for us as well."

"With the conditions as they were tonight we were happy to get out of there with a win," Barrett said.