More than 15 months after fatally stabbing another inmate in an incident clearly captured on surveillance video, a 39-year-old former Putnamville Correctional Facility inmate pled guilty to murder during a hearing Wednesday in Putnam Superior Court.

Anthony W. Reid -- who had only nine months left to serve on a Floyd County prison sentence for aggravated battery when he was charged with the June 12, 2014 stabbing death of fellow PCF inmate Darwin L. Elmore, 34, Indianapolis -- agreed to plead guilty to murder with a sentence capped at 50 years. 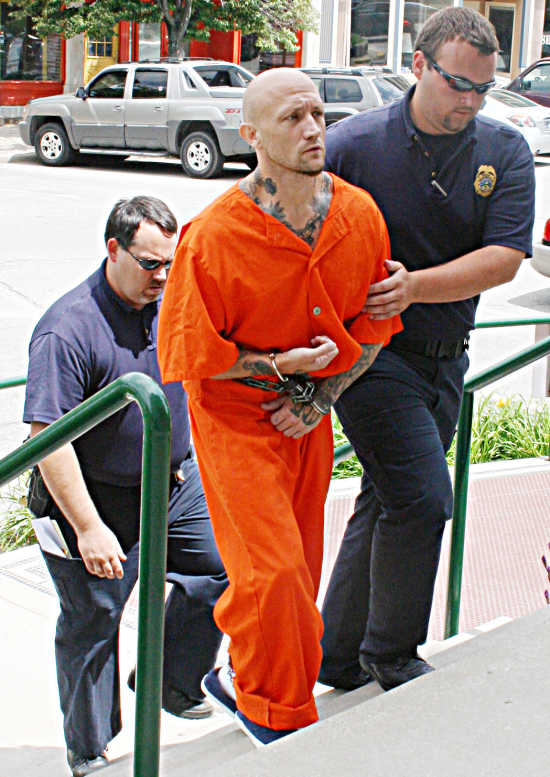 Flanked by Indiana Department of Correction guards, Anthony W. Reid makes his way to his initial appearance in Putnam Superior Court in June 2014.

In return, the state agreed to drop a habitual criminal enhancement that could have added 30 years to Reid's sentence.

Putnam County Prosecutor Timothy Bookwalter had been preparing to go to trial in front of Judge Denny Bridges in a proceeding set for Oct. 27-29 when a pretial conference changed all that.

However, during that courtroom meeting Wednesday, Bookwalter spoke to the defendant and his court-appointed counsel, Scott Adams, for about an hour and an agreement was reached that will avoid a trial and save the county what Bookwalter estimated at $6,000-$10,000.

"If it goes to court, we have to pay two psychiatrists and the pathologist who did the autopsy, and they're going to charge me," Bookwalter said. "And once we play that tape ... it's a glorified guilty plea."

Surveillance video of the PCF dormitory day room shows inmates sitting watching television when Reid jumps to his feet and stabs Elmore -- seated on the end of the front row -- once in the neck and shoulder. Reid then appears to stab the victim once more in the back with what was described as a four-inch shank, or makeshift knife, wrapped in white shoelaces.

He created the knife from a piece of metal he had found on the ballfield an hour earlier, Reid told investigators right after the incident.

Elmore had been serving time at Putnamville for dealing cocaine.

Bookwalter said in talking to guards and other officials familiar with the suspect and the Putnamville climate, it was noted that "what drives him (Reid) is respect."

The veteran prosecutor and former defense attorney said he gave Reid that respect Wednesday, sitting down face to face and letting the defendant tell his story and get it out of his system.

"I think he felt like somebody heard him and showed him some respect," Bookwalter reasoned, and then Reid was ready to plead guilty.

"It's murder," the prosecutor assured. "But he's been institutionalized now for 17 years, and respect is a big issue in there. He admits he did it. Why he did it is what he wanted someone to know."

There was "bad blood" between the two men, Bookwalter said.

Court documents note that Reid said he did it because Elmore "was a bully" and he wanted to send a message.

Although authorities stopped short of establishing race as a motive in the case, Reid is white and the victim was black. And when investigators asked Reid what had happened that day, he reportedly responded with racial slurs.

Reid had previously attacked another black inmate and had been associated with inmates known to have "white supremacist beliefs," investigators also noted.

Sentencing will be argued in front of Judge Bridges at 1 p.m. Friday, Nov. 6. If Reid gets 50 years, he would likely do half the time under the old Indiana criminal code, which means he would be eligible for release from prison at age 64.

Reid was taken to the Reception and Diagnostic Center at Plainfield to await sentencing.

Reid, who after the Putnamville incident was transferred to the Wabash Valley Correctional Facility at Carlisle, had been facing one count of murder, a Class A felony punishable by 45-65 years in prison (with an advisory sentence of 55 years) with an additional 30 years possible as a habitual criminal and a fine of up to $10,000.