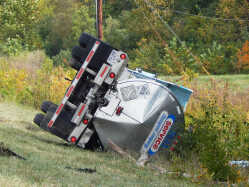 At approximately 10:30 a.m., Indiana State Troopers from the Indianapolis Post were dispatched to the scene on the report of a semi-tractor tanker in the ditch on the south side of the roadway. The preliminary investigation revealed that Howard Durling, 59, of Houston, was operating a 2013 Volvo semi-tractor tanker eastbound and experienced mechanical steering problems.

As Durling was attempting to move to the emergency shoulder he lost steering control, causing the semi-tractor tanker to go into the ditch and overturn onto the passenger side. Durling was not injured.

The tanker was not compromised but a small leak occurred from a valve on top of the tanker due to it lying on its side. Haz-mat specialists from Summit Environmental Services were able to secure the leak and the load of toluene. Westbound lanes remained open during the investigation.

The Indiana Department of Transportation initiated a detour route at State Road 39 to U.S. 40 to State Road 267 to move traffic around the crash scene. A certified tanker from Ohio was brought to the scene to offload the haz-mat material