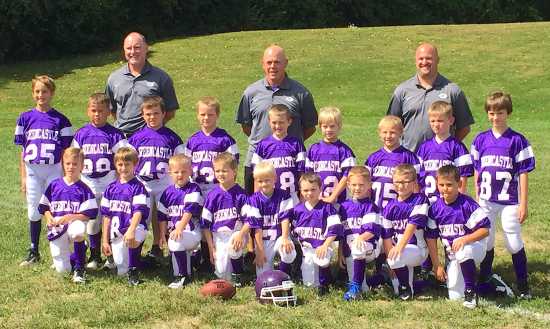 The Greencastle football team has some bright days ahead.

With an emphasis on fun, the junior Tiger Cubs took the field this season with 20 of the city's finest future football stars, shutting out -- that's correct -- shutting out every opponent faced through 10 games in 2015.

Head coach Kelly Lewis, along with assistant coaches Todd Sutherlin and Rob Worman, recognize that winning is important. But for this group of first and second graders, all of whom hail from either Ridpath Primary or Deer Meadow Primary schools, winning is simply becoming a natural state of mind.

"(To win) is always the overall mentality, but sometimes it overshadows the fun side of football," Lewis said. "After 17 years of coaching youth football, I have never coached a team that was never scored on -- this is a unique and unselfish group of kids."

To further iterate Greencastle's dominance: if season scores were accumulative, the fledgling Tiger Cubs' tally would total 259-0, or 25.9 average points per game (ppg), allowing zero points-against in the process.

Some future Western Indiana Conference foes were in the mix this year as well, potentially foreshadowing the years ahead. Greencastle opened its season with an Aug. 12, 20-0 win on the road over South Putnam, followed by a 22-0 win over Owen Valley at home on Aug. 15. A short time later, a 28-0 victory over Cloverdale at home on Aug. 29 was earned, followed by a 27-0 win on the road over Cascade-Black on Sept. 5.

The league championship, a.k.a. the Super Bowl, also belonged to the junior Tiger Cubs, winning 22-0 over youth-league rival Cascade-Black on Oct. 4.

Of the 20 kids on the team, Lewis said only 15 were eligible to carry the ball due to weight-limit restrictions for elementary-aged kids. Of those 15, 10 scored at least one touchdown throughout the season.

This concept of sharing with a selfless attitude, Lewis said, may have affected a bigger impact than winning alone.

"The important thing, with kids that age, is getting them to enjoy the game," Lewis said. "Football has gotten a lot of negative publicity lately with concussions and things like that. We want to teach (the kids) that football is about more than winning."

Damian Wheeler, father to player Roxxus Wheeler, praised the coaches and the team, saying this could be indicative of the years ahead.

"I fully believe these boys can remain an undefeated team if they continue to play with each other," Wheeler said. "The camaraderie these boys have at such a young age is heartwarming. They were extremely humble in victory and deserve a massive pat on the back for their accomplishments. Let's not forget the coaching staff, they kept (the kids) humble and worked them hard."