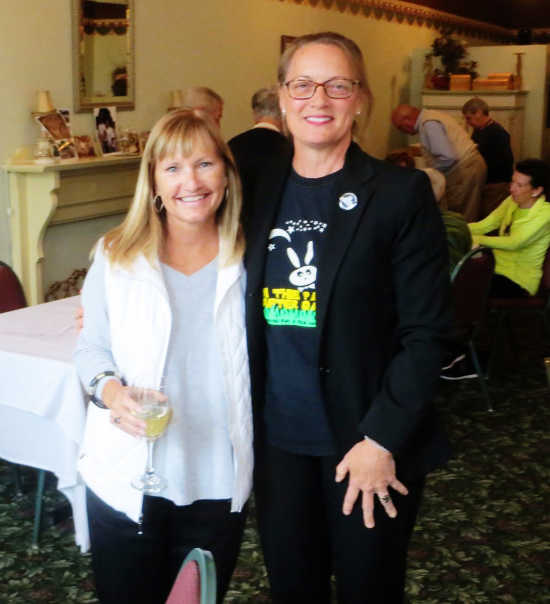 Out-going Friends of the Park President Jan Firebaugh (right) is congratulated by Joan Davis, another longtime officer of the organization that celebated its 20th year during its recent annual meeting at Almost Home. (Courtesy photo)

Celebrating 20 years of helping create healthy recreation and promoting the enjoyment of community parks, the Friends of the Park Association of Putnam County conducted its annual meeting and honored its out-going president during a program at Almost Home in Greencastle.

Friends of the Park President Jan Firebaugh -- wedded to the organization and ironically married to a man named Park -- managed to retain her responsibilities despite moving to Bloomington when her husband sold his local dental practice earlier in the year.

At the annual meeting last week, she was given a rousing send-off in honor of all her work for the parks over the years. She was even presented a charm bracelet, symbolic of some of those top moments in the Friends of the Park history.

"My celebration of service was a lovely surprise," Firebaugh told the Banner Graphic, adding "the bracelet was so thoughtful. I will cherish it and all the wonderful memories of living in Greencastle.

"What a wonderful evening," she told the group. "It was so good to see so many of you, as well as old friends who have cared through the years about our parks and pathway system."

Firebaugh stressed that "for 20 years, the 'Friends' have been promoting recreation, adding to our city parks, building pathways."

And as proof of that,the Friends of the Park annual meeting program listed the accomplishments the organization has made to the community over the past 20 years with help from volunteers and organizations like the Putnam County Community Foundation, the Greencastle Civic League and more.

Founded in 1995, Friends of the Park of Putnam County was formed by a committed group of citizens dedicated to improving recreational options for all citizens. For more than 20 years, the "Friends" remain committed to recreation, parks and trails for all who live in Putnam County.

Some of those projects have included:

The Castle Playground -- The Friends' first project was the castle playground in Robe-Ann Park. The success of this initial project inspired others in the community to contribute to the park and to complete projects -- large and small -- to benefit all.

People Pathways -- The People Pathways effort in Putnam County was started in the fall of 1995. The mission was established to enhance the quality of life of the community by developing a network of multi-use trails to promote community connections, interaction, good health, safety and non-motorized transportation. People Pathways is a not-for-profit group that functions under the umbrella organization of the Friends of the Park Association of Putnam County.

The Emerald Palace -- In 2000, the Greencastle Civic League initiated and completed a Leathers Playground in Robe-Ann Park so children can explore and test the limits of their strength and imagination in a multi-level paradise.

The Greencastle Skatepark -- Completed in 2003, the "Friends" gave support to a grassroots effort of a group of parents and youth to see the creation of one of the best concrete skateparks in the Midwest, featuring two nine-foot bowls. The Tony Hawk Foundation even supported the project.

Friends of the Park Association of Putnam County Endowment -- Founded in 2006 as an endowment at the Putnam County Community Foundation (PCCF). "We know that as good stewards, we must ensure these community assets are taken good care of in the future," it was noted.

Mary Rogers Field Park -- In 2007 and in loving memory of their friend, Mary Rogers Field, the "Friends" worked with the City of Greencastle to create an open space park next to City Hall for a place to relax, read, draw or have lunch with friends. Plantings attract birds and butterflies.

Robe-Ann Park -- In 2009 and 2010, the "Friends" supported to replace and remodel two shelters, furnished handicap-accessible picnic tables, purchased new lifejackets for " learn to swim" program, supported a new audio system to the Aquatic Center and improved landscape to the park area.

Celebrate 4 -- Nothing beats an old-fashioned Fourth of July celebration with music, contests and more. In 2011, the "Friends" committed to this important community event by overseeing the fundraising for the free-to-the-public event.

Big Walnut Sports Park -- In 2011, the "Friends" collaborated with Area 30, the PCCF and the Walmart Foundation to create landscape in the parking area islands.

Greencastle Splash Park -- Completed in 2014, the "Friends" committed $4,000 to the splash park project.

Jaycee Park -- A grassroots group founded Jaycee Park Multi Use Trail project in 2013 with 0.9 miles of the trail project completed in Phase One. The group is currently working on Phase Two, an additional half-mile of trail.

Envision 2016 recipient -- People Pathways, operating under the Friends of the Park Association of Putnam County, will receive $84,000 to complete Phase One of the Putnam County Nature Trail, extending the multi-use trail to the west beginning at Veterans Memorial Highway and South Jackson Street. Eventually it will extend from Greencastle to the Clay County line.