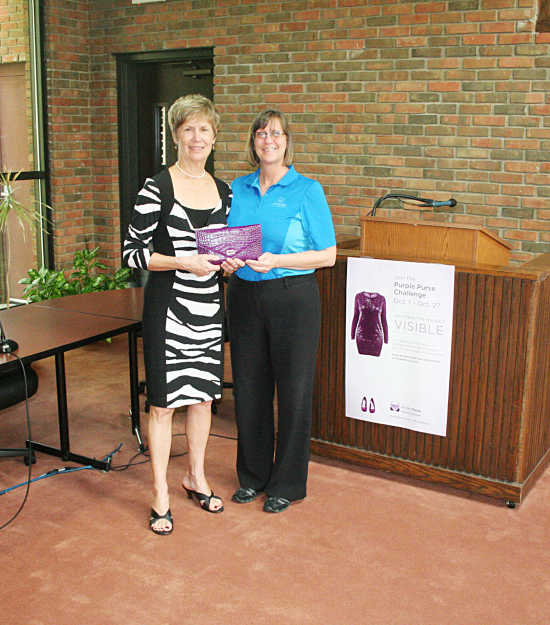 Sally Fowler (right) presents Greencastle Mayor Sue Murray with a purple purse Thursday. The purse is meant to be a conversation piece during the month of October, which has been declared Domestic Violence Awareness Month. (Banner Graphic/Sabrina Westfall)
Order this photo

Mayor Sue Murray will be carrying around a purple purse as part of October being declared Domestic Violence Awareness Month.

Allstate agent Matthew Welker and licensed sales professional Sally Fowler presented the mayor with the purse on behalf of the Allstate Foundation. The foundation partners with organizations across the country through the Purple Purse Movement, an awareness and fundraising program to help with funding of programs dealing with domestic violence.

Murray signed a proclamation Thursday, designating October Domestic Violence Awareness Month in the City of Greencastle before being presented with the purse. 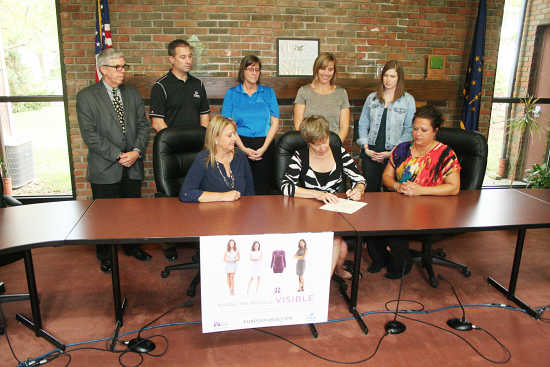 The campaign's statistics note one in four women will be affected by domestic violence with about two million injuries and 1,300 deaths nationwide.

"The purse is a symbol of strength and security," Fowler explained.

"The Purple Purse is a public awareness and fundraising campaign for long-term safety and security from domestic violence."

Fowler explained domestic violence is not confined to physical violence, but can also be manifested as financial abuse. Leaving a woman with no way to escape affects more people than one would think, Fowler explained.

The financial assistance is where the Allstate Foundation tries to help. Through the Purple Purse Movement, funds are raised and donated to organizations across the country to help families get back on their feet. The movement stresses financial empowerment as a way to ensure women and their children do not feel pressured to return to an unsafe environment simply because they have no money to stand alone.

Locally, the agency will be making a donation to Putnam County Family Support Services to help with financial stability and Fowler has started volunteering her time with the organization.

By visiting www.purplepurse.com, persons may donate to the cause or learn more about what victims of financial abuse experience.

"There is a section called 'Live the Experience.' It is both disturbing and enlightening," Fowler said

The virtual experience details the issues someone faces when trying to escape an abusive relationship, such as being hours away from family, a spouse raiding the secret stash of cash and being locked out of bank accounts so buying plane tickets are out of the question.

In addition to www.purplepurse.com being a place for those interested to donate, there are also resources for women in need. The website design resembles that of a fashion magazine, but provides information to a domestic violence hot line and protecting oneself from having Internet activity tracked. There is also a quick way to exit the website without raising suspicion.

Welker said there are 10,000 Allstate agents across the country and only 200 are able to present a purple purse to raise awareness. The agent noted his appreciation of the mayor for "accepting the role as advocate and volunteer."

This is the second year Welker's agency has been able to present the purple purse, which was designed by Dee Ocleppo with national spokesperson Kerry Washington promoting the cause.