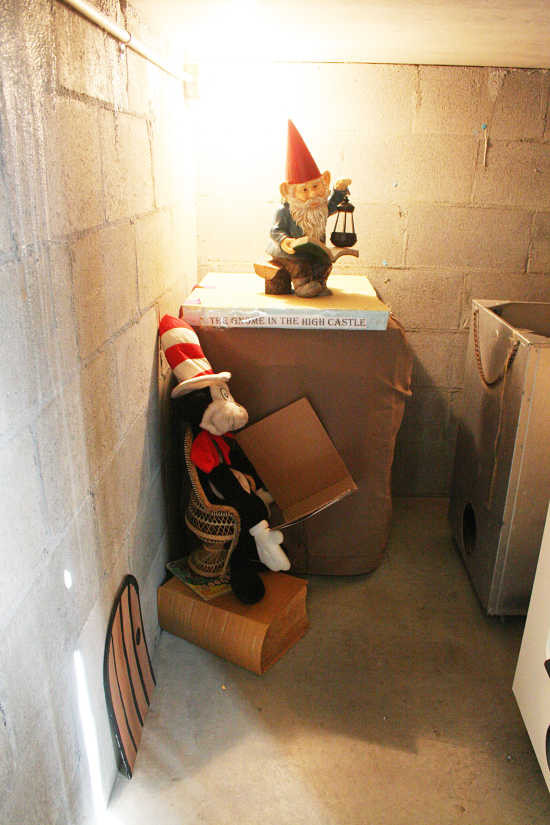 When patrons look through the peephole in the small door just inside the library's entrance, they will see Ollie the Reading Gnome and his companion, Cat in the Hat. (Banner Graphic/Sabrina Westfal)

Books are not the only way the library engages the imagination of its young patrons.

Putnam County Public Library has welcomed a guest that frequently borrows books returned through the book drop on the wall by the Poplar Street entrance.

Circulation Manager Cortina Ziuchkovski and fellow circulation desk employee Conni Wrightsman invited Ollie the Reading Gnome to set up in the half-size door just inside the front entrance of the library, across from the circulation desk. 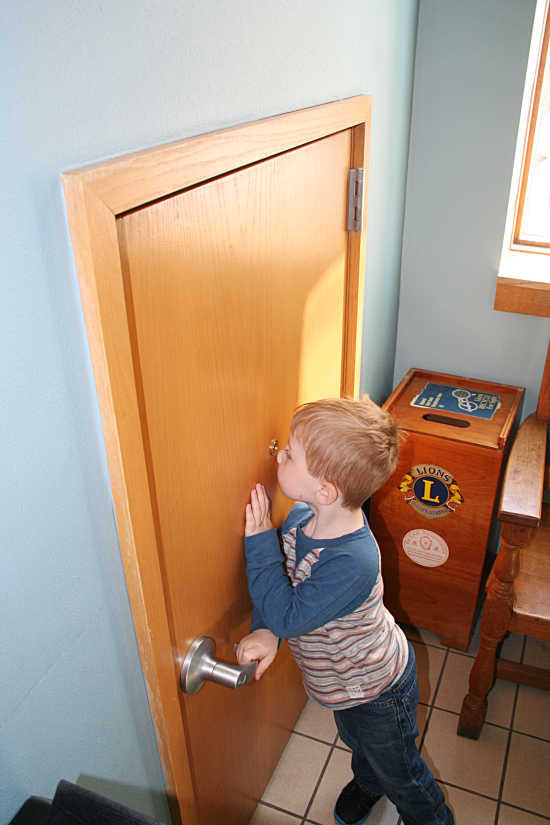 Andrew Kern, 3, and mom Whitney, of Plainfield, visited the library this week. When he was unable to get the door pried open, Kern peaked in the door to see Ollie the Reading Gnome. (Banner Graphic/Sabrina Westfall)

Wrightsman said Ollie is currently reading a book he borrowed from the book drop and is joined by another avid reader -- Cat in the Hat.

The idea to put a guest inside the small room was sparked in recent months after several young patrons kept trying to pry open the small door, which is similar in size to the one implemented in the Imagination Portal. The small door was mainly used to gather the books and videos returned to the library through the drop boxes outside.

Each month the circulation manager includes a list of ideas she would like to see happen in a report to the board of trustees. A few months ago she asked for a peephole to further indulge the children's imaginations. While it was a plan the two were not sure would happen and hoped would be considered in the future, it soon came to fruition.

"It was kind of a 'dream big' idea and (director) Grier (Carson) ran with it."

Once the peephole was installed, a poster was placed inside. Viewing the poster did not work as planned, so the two went on a search for a statue that welcomed small, curious eyes and also promoted reading.

Wrightsman found the gnome, with a book in hand, during an online search and he was brought to the library. The name Ollie was inspired by the name of a gnome character in a book, Wrightsman noted.

Ollie's presence has done just as the two hoped -- piquing local youngsters' imagination as the children first enter the library.

For some, checking on Ollie has become a sort of tradition as they enter the library for each visit. Some little ones are still discovering the small door and the library's friend that lives inside.

"One little girl asked if she could send Ollie a letter, and we told her we would give it to him," Wrightsman added with a laugh.

Although, there is a catch. Ollie can only be seen through the peephole. If the door is opened, Wrightsman said Ollie will run away and hide in his little door inside the book drop room or he gets scared and becomes stiff as a statue.

The library is full of ways to entertain one's imagination, and with a little help from the library staff the young visitors can do so in several different ways.

"It's kind of like the idea behind the big tree downstairs (in the Imagination Portal). This is something they will remember. When they grow up, they will remember coming to the library to see Ollie," Wrightsman said.