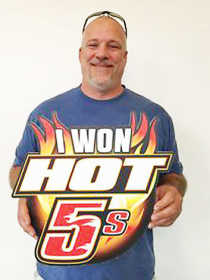 INDIANAPOLIS -- A Putnam County man is among a recent surge of winners in the Hoosier Lottery.

Brian Shields of Greencastle emerged recently as one of a number of central Indiana lottery players to fare well in the first drawing of the Sizzlin' Hot Second-Chance Giveaway game.

Shields recently claimed a $10,000 prize in the Sept. 30 mylottery drawing, as did fellow players Sunshine Parra-Butt of New Palestine, , Steve Padgett of New Castle and Robin Eastes of Gas City.

The Sizzlin' Hot Second-Chance Giveaway promotion features four additional drawings, each for multiple winners, through May 2016.

Since the Hoosier Lottery began selling tickets 26 years ago this month, players have won more than $9.4 billion in prizes.

Since mid-September, Hoosier Lottery players claimed several other significant prizes, ranging from $10,000 to $5 million in winnings, including:

-- Greenwood's Antonia Mascari won $5 million in the grand prize drawing of Indiana's $5 Million Club second-chance drawing Sept. 25. She split her winnings with her mother and plans to use her share to buy a condo.

-- Joe Wood of Carmel scratched his way to a $1 million prize Sept. 14 on a 50X the Money scratch-off ticket at Meijer in Carmel.

-- Truck driver Craig Lochard of Noblesville plans to start a college fund for his son after winning $1 million at halftime of the Sept. 21 Colts game in the Lucky Millionaire second-chance drawing.

--- Retired Marine Kenneth Giles and his wife Connie, a retired teacher of 35 years, won $300,000 playing Quick Draw in the Oct. 10 drawing, purchasing their winning ticket at Express Mart in their hometown of Bloomington.

-- Retired shipping dock worker Kenneth Coffman of Martinsville plans to help his kids and "play a little" with the $150,000 prize he collected Sept. 23. Coffman snagged one of the White Hot 5s game's six top prizes at Circle K in Martinsville. Four of the $5 game's top prizes are unclaimed at this time.

-- Northern Indiana residents William DuBois of Logansport and Stephanie Borlov of Michigan City were the first two Hoosiers to claim $90,000 top prizes on the Platinum Mine 9X scratch-off game. DuBois purchased his winning ticket at Zip-Thru Drive Thru II in Logansport, while Borlov purchased her $90,000 winning ticket at Family Express in Valparaiso.

-- Bart Chocianawicz of LaPorte was the first $50,000 winner of the Sizzlin' Hot Second-Chance Giveaway drawing Sept. 30. Another northern Indiana resident, Theresa Heredia of Fort Wayne, scored one of the promotion's $10,000 second-chances prizes in that drawing. Another $50,000 winner and five more $10,000 winners will be drawn in the next Sizzlin' Hot drawing on or about Nov. 18.

-- Heather Shively-Osborne of Evansville struck gold purchasing a $124,000 winning Gold Mine ticket at Circle K in Evansville. Shively-Osborne is one of more than 100,000 Hoosier Lottery players who have snagged prizes on the popular scratch-off game since February. At this time, 16 prizes of $10,000 and more than 200 prizes of $1,000 are unclaimed on the Gold Mine game.

-- The Wild Cherry Crossword Tripler game paid off for a southern Indiana couple, George and Mary Geraghty, who claimed a $50,000 prize Sept. 10 after purchasing a winning ticket at Circle K in their hometown of Georgetown. They plan to use their winnings to check items off their bucket list, such as a trip to Ireland.

Sarah Hylton of West Virginia was visiting her sister in Warrick County when she purchased a $20,000 winning Super Duper Bingo scratch-off ticket at Huck's in Chandler. She hopes to use her winnings to move to Indiana to be near her sister and become a Hoosier herself.