Round No. 1 of football sectional features rematch 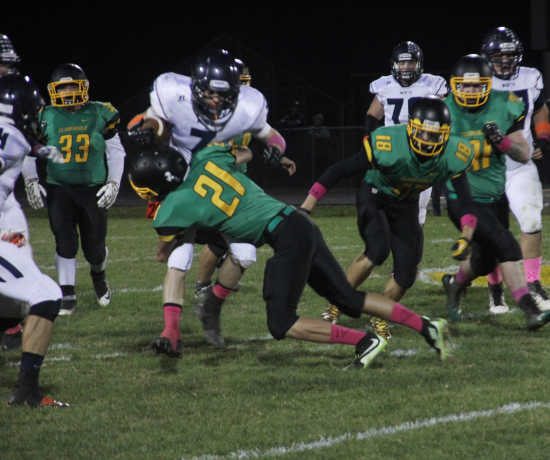 Garrett Hamilton (21) of Cloverdale puts a hit on North Putnam's Blake Everts (7) on Oct. 9. The Clovers and the Cougars will face off again Friday in the sectional rematch. (Banner Graphic/JAY LOCKETT)
Order this photo

It'll be a Putnam County rematch Friday night when the Cloverdale football team (1-8, 1-4 WIC) takes on North Putnam (7-2, 4-1 WIC). The Cougars and Clovers played in the last week of the regular season with North Putnam coming out victorious 55-6. CHS scored 20 points in its most recent loss to South Vermillion, its second-most of the year.

Before North Putnam's loss in the cross-over game, the Cougars had won five games in a row. The winner of this matchup with play either Cascade or Paoli.

South Putnam (6-3, 3-2 WIC) will take on Sheridan (3-6) with the winner to play Fountain Central or Rockville. Sheridan's wins have come against Clinton Central, Eastern (Greentown) and a nail-biter with Taylor, all of which have losing records.

The Eagles are scoring 31 points per game despite a recent shotout loss against Northview and Sheridan is scoring 25 points and has scored in double digits in every game.

Greencastle (1-8, 0-5 WIC) will be making the trip to the north side of Indy to play Guerin Catholic (7-2). The Golden Eagles are coming off back-to-back wins and one loss in its last seven games. GHS' only win came against Cloverdale in week two.