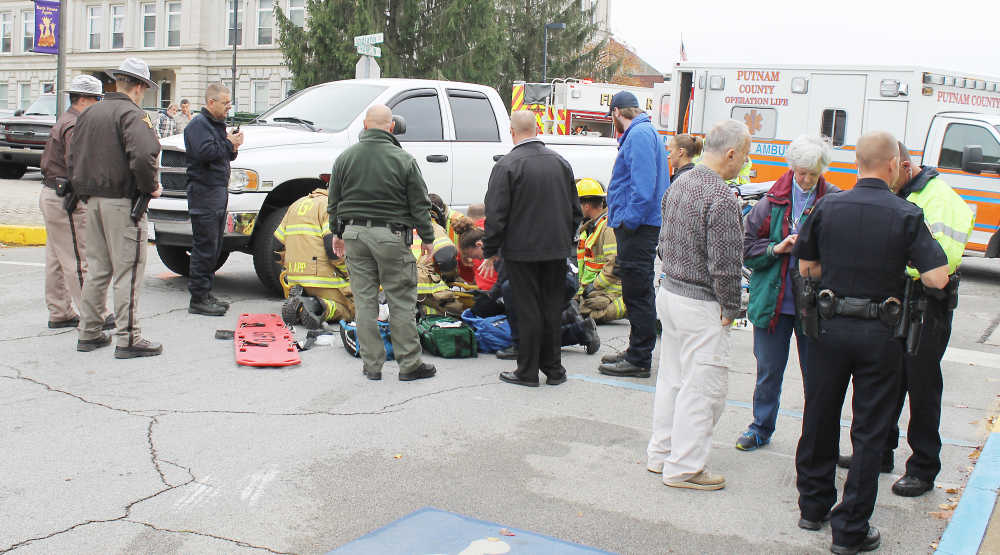 Emergency workers attend to a California woman who was hit by a pickup truck on courthouse square Tuesday afternoon. Sharon Osthimer of Bakersfield later died after being airlifted to an Indianapolis hospital.

A California woman died at an Indianapolis hospital Tuesday afternoon after being struck by a pickup truck on the Greencastle courthouse square.

Sharon Osthimer, 79, Bakersfield, suffered leg and head injuries when she was hit by a Dodge Ram pickup driven by Jeffery Layton, 56, Greencastle.

Osthimer, who was in town visiting family, and another female were attempting to cross Franklin Street at the crosswalk east of Indiana Street.

Layton was southbound on Indiana in his truck, preparing to turn left onto Franklin. He told Officer Darrel Bunten of the Greencastle Police Department he looked both ways before turning, but did not notice the two women trying to cross the street.

As the women crossed from north to south, Layton continued his left turn, striking Osthimer with the left front of the vehicle.

Emergency personnel were dispatched at 1 p.m. to reports of a woman trapped under the vehicle.

They arrived to find Osthimer unconscious, with legs on either side of the truck's left front tire.

She remained unconscious throughout the incident, having apparently struck her head on the pavement when she fell, as well as suffering serious leg injuries.

Operation Life transported her directly to the Putnam County Regional Airport, where a StatFlight helicopter was waiting to transport her to an Indianapolis hospital.

A family member contacted the Banner Graphic late Tuesday afternoon saying that Osthimer had passed away.

Although GPD units were on the scene within minutes of the dispatch, Osthimer was attended to even sooner thanks to two emergency workers -- one active, one retired -- in the chairs at Dick's Barber Shop.

Off-duty Greencastle firefighter Jeff Elkins and retired Putnam County Sheriff Richard Lyon were both at the barber shop and saw the accident happen. Both were out of their chairs and on the street in moments, with Lyon still wearing the neck guard from his haircut.