One thing Wednesday night's Candidates Forum illustrated is there might be as many issues and answers as candidates running for the at-large Greencastle City Council seats in the Tuesday's municipal election.

The debate in Watson Forum of the DePauw University Center for Contemporary Media was presented by the Greencastle League of Women Voters in conjunction with WGRE radio and the Banner Graphic. (An earlier story addressed the mayoral and clerk-treasurer candidates). 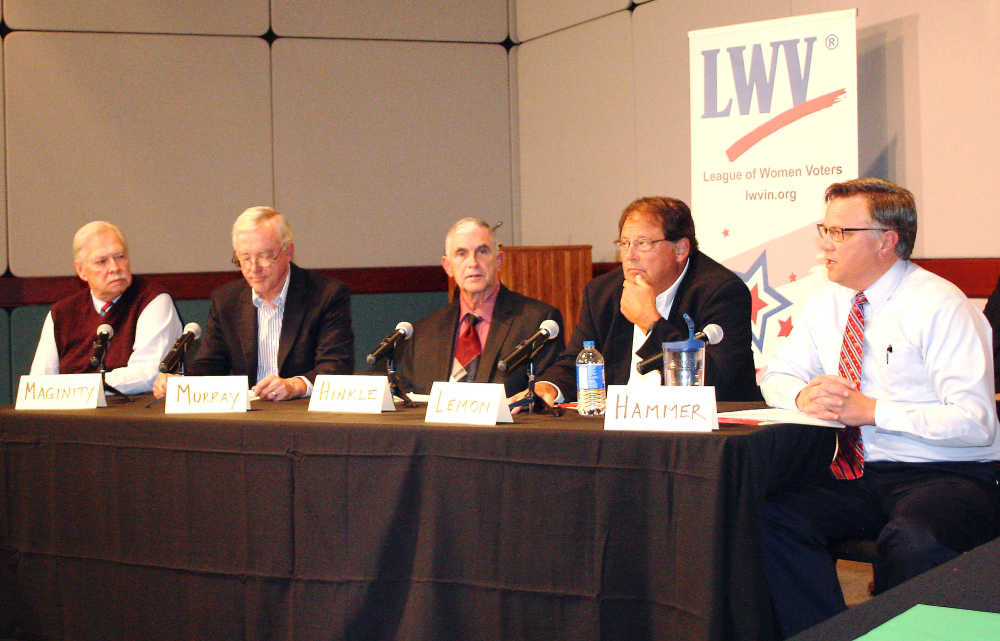 That quintet -- vying to become members of the largest Greencastle City Council in history when the panel expands from five to seven by going from one to three at-large representatives -- was asked if they could solve a single issue during their four-year term what would it be.

Hinkle said he would endeavor to get the truck traffic off the square, suggesting the possibility of a permanent truck route along the west side of the city from Elizabeth Street to Veterans Memorial Highway.

"A bypass is usually a hot topic in an election year but dies down due to lack of follow-up," Hinkle said.

Murray, meanwhile, said he was torn between two things -- developing the new, two-year "ASAP" program at Ivy Tech that he sees as important to future economic and a YMCA/community center.

"My first choice would be the YMCA," Murray reasoned, "because it touches so many peoples' lives."

Maginity, meanwhile, spotlighted another traffic issue, urging focus on the Indianapolis Road corridor between the "Y" intersection at Wood and Washington streets to Percy Julian Drive.

He pointed to "sight-distance problems" in the area, the lack of sidewalks and other safety issues that need to be remedied.

Next up, Hammer, currently the Second Ward councilman, pointed to continuation of the People Pathways project "both inside and outside the city." Calling it a "wonderful economic development tool," Hammer added, "I'd like to see continued development of those trails."

The last of the five to get a chance to answer, Lemon took a different tact.

"Obviously, the YMCA is something I'd love to see, and boy, would I like to see truck traffic off the square," he offered, "but that's a state highway and there's too many people involved, so that's not going to happen."

"We need to tell our story," he stressed, and "get the word out to potential employers. We can do that, and the way we do that is by telling our story."

The five candidates were also asked what should be done downtown to assure the Stellar Grant momentum continues in Greencastle.

"I think it's a wonderful time," Lemon said. "There are rumors of new restaurants for downtown. We need to try to get more people to come downtown. We've got to keep that momentum."

Hinkle, meanwhile, termed the square "not very public-oriented" with its mix of pedestrian and through traffic and again addressed "a need to modify traffic routes," possibly via one-way streets.

He suggested the possibility of creating "a plaza-type environment instead of a street-type of environment."

The emphasis on arts and music downtown is something Murray said he is excited about.

He pointed to Gail Smith's Greencastle Music Festival and other musical events as indicative of new life and interest downtown.

"And there are new restaurants coming," he said, "as we sit here tonight."

Maginity, however, wants to see a "more vibrant" downtown.

"I'm hearing restaurants and music," he said. "We need a real plan that could be sustained for shops and businesses."

Growing up in Greencastle, Maginity recalled the days when there were two department stores downtown, along with two men's stores and two women's shops as part of the "vibrancy of downtown."

"Maybe we could do that today," he said.

Hammer, the last candidate to tackle the question, noted that refurbished Vine Street has reopened and pointed to the Civic League mural on the side of Eitel's as "things adding to the vibrancy of our downtown."

"That shows some hope for the future," he said, noting that "toward the economic development end of it," more entry-level housing and "affordable, good-quality housing" are key.

Other questions and issues produced some interesting comments from the five at-large candidates.

Murray, for example, called for the need to elect "positive, passionate and creative candidates," saying he had found it "absolutely incredible some candidates are finding fault with what the city has done over the last eight years."

Maginity, in calling for change after 28 years of Democrat rule in the city mayor's office, noted that "there are insiders and there are outsiders in Greencastle. It's time to 'unclique.'"

Hinkle interjected the comprehensive city plan into the discussion a couple of times, noting "it is time to remove the aging Greencastle City Comprehensive Plan from the shelf, dust it off and renew it." He also stressed the need for "planning, inventory taking and prioritizing areas in need."

Hammer noted that truck traffic is not just an issue downtown, but that it affects neighborhoods as well, suggesting it is time for weight limits on streets like Berry and Shadowlawn. "Truck traffic is like water," he said, "it will find the easiest way through." Hammer urged educating local industry officials to discourage trucks from cutting through and abusing city streets.

Lemon even addressed a pet peeve, noting that whenever he sets foot in a crosswalk -- or "zebra" as he called it -- in Colorado or London, traffic comes to an immediate stop and pedestrians advance safely. "You put your foot in it here," he said, "and people accelerate."

Noting there is a state law that requires vehicles to stop when pedestrians are in the crosswalk, Lemon said he'd "like to see a little more respect for people who are pedestrians," especially in light of the tragedy occurring earlier in the week when a visiting pedestrian was a fatally injured on the square.