All treat, no trick ... and just in time for Halloween, South Vine Street has reopened in Greencastle.

Barricades that went up in mid-May, came down Wednesday as the Vine Street streetscape project portion of the city's Stellar Community grant project nears completion.

New pavement, sidewalks and improved drainage were all part of the package Shutt-Lookabill Co., Indianapolis, has undertaken in the corridor between Washington and Seminary streets. 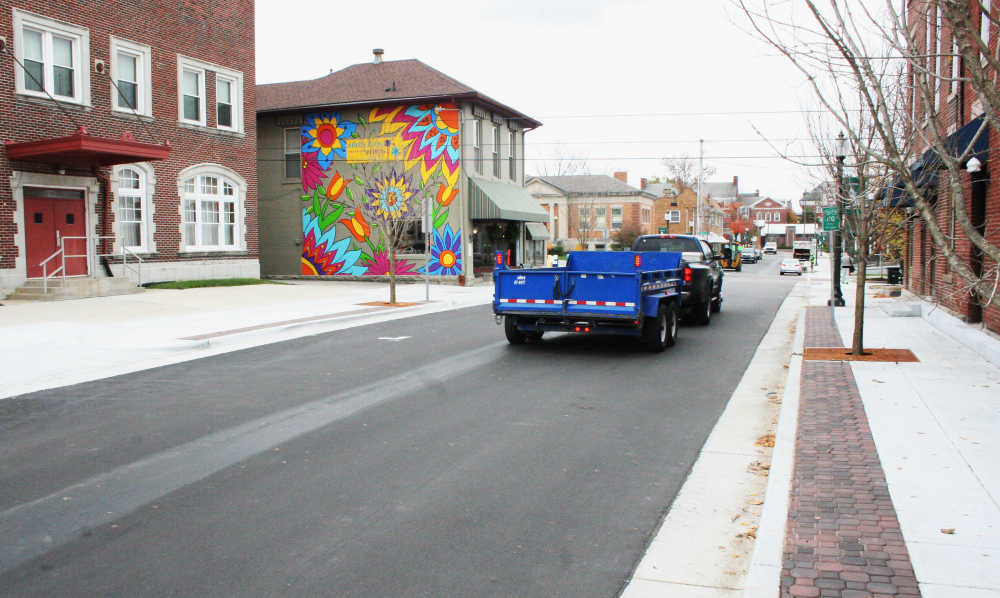 Looking south on Vine Street, it appears to be smooth sailing now with new asphalt, sidewalks, curbs and drainage improvements in place between Washington and Seminary streets. Banner Graphic/ERIC BERNSEE

Mayor Sue Murray called it "a really positive improvement" when she advised the Greencastle Redevelopment Commission that the street has reopened and substantial completion has been achieved by the contractor, who had workmen on the scene Friday doing detail work.

Originally proposed with an Oct. 1 deadline, the project sustained a couple delays over the five-month life of the work but met its more recent deadline of Oct. 30 for substantial completion.

City officials have not yet conducted a final walk-through of the project with Indiana Department of Transportation (INDOT) representatives, the mayor said.

City Councilman Mark Hammer, whose accounting business has been in the midst of the reconstruction area, said excitedly Wednesday he "drove the length of it (Vine Street)" because he could.

So traffic flow and parking seemed to be back to normal in the area with the temporary entrance to the Vine Street parking lot even removed and intersecting streets restored to one-way fashion where applicable.

"You can actually pull up and drop off your mail," Mayor Murray smiled, adding that "when you look down the alley between the Carriage House and the post office, 'Wow,' you can actually walk down through there."

Meanwhile, proof that the drainage has been revamped as well is that all the downspouts in the alley have now been connected to the storm sewers.

So with the completion of the last of the three streetscape projects at hand, the Stellar Grant project is winding down, leaving Phase II of the downtown facades, loft apartments downtown and a trail project yet to come.

The facade work is well under way again downtown with equipment visible on at least three sides of the courthouse square this past week.

"There are more scissor lifts downtown than ever before," Mayor Murray observed.