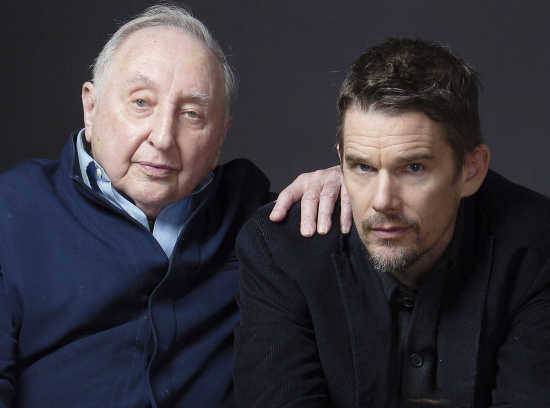 The film "Seymour: An Introduction," directed by Ethan Hawke, follows the life of legendary New York pianist Seymour Bernstein (left) who, after retiring from performing, became a music teacher. Bernstein will travel to Greencastle for a two-day visit (Nov. 3-4), co-sponsored by DePauw Film Studies and the School of Music. (Courtesy photo)

An opportunity to learn from international piano pedagogue Seymour Bernstein will be offered through DePauw University School of Music in a series of three events Nov. 3--4.

Bernstein, who made his professional debut with the Chicago Symphony Orchestra playing the premiere of Concerto No. 2 by Villa-Lobos, maintains a private studio on New York City and is a faculty member of New York University.

In 2013, the American actor and film director Ethan Hawke created a documentary about the pianist titled "Seymour: An Introduction" that has since been distributed globally and garnered rave reviews.

Next week, Bernstein travels to Greencastle to attend a screening of the film during a special two-day campus visit that is a part of DePauw's 14th annual ArtsFest, that will also include a lecture-demonstration and master class.

All three of the ArtsFest events in which Bernstein will participate are free and open to the public:

Ashley Square Cinema, followed by a post-film forum in Emison Lobby with Seymour Bernstein and James B. Stewart '73

One of the most sought-after clinicians in this country and abroad, Bernstein, a renowned pianist, teacher, composer, writer and lecturer, has won innumerable awards and is well known for his master classes and educational programs. Many of his compositions are on bestseller lists.

His books "With Your Own Two Hands, Monsters and Angels -- Surviving a Career in Music, 20 Lessons in Keyboard Choreography, Musi-Physi-Cality" and "Chopin -- Interpreting His Notational Signs" have been hailed as "landmarks in education" and translated into Japanese, Chinese, Korean and Russian.

His concert career has taken him throughout the Americas, Europe and Asia, where he has appeared in solo recitals and as guest artist with orchestras and chamber music groups.

"Seymour Bernstein is a legend. His books are a must-read for all pianists," said May Phang, who directs the piano studio at DePauw. "To me, he epitomizes music being life, and life being music. I am extremely excited about his visit. It will be inspirational to all."

For additional information, persons may contact Prof. May Phang, mphang@depauw.edu.