John W. Buck passed away on Saturday, Oct. 31 at Union Hospital after a brief illness.

He was born on Oct. 11,1912 on the family farm near St. Patrick (Clark County), Mo. His parents were John Warren and Margaret Jones Buck.

He graduated from Purdue University in 1940 and received his master's degree from the University of Chicago in sociology and criminology. 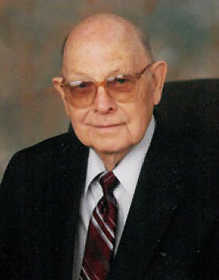 John was a veteran of the Army-Air Force, serving from 1942-46. He was stationed in both India and China during World War II.

John worked for nearly 30 years for the Indiana Department of Correction. He began as a guard at the Indiana State Prison in Michigan City. He went on to be director of Classification and director of Education at the same institution.

In 1969 he retired from the Department of Correction and came to Indiana State University as associate professor of criminology. His specialties were correctional institutions and juvenile delinquency.

John retired from fulltime teaching in 1983 but continued to teach part-time for Indiana State and lectured at the Indiana Police Academy.

He belonged to the Retired Indiana Public Employees Association and the Indiana Correctional Association.

He was also preceded in death by one brother, Donald; one sister, Doris Schock; and an infant granddaughter, Mara McAllister.

He is survived by two daughters, Rita McAllister of Vincennes and Alice (Roderick) Buck-Reece of Terre Haute.

John is also survived by a brother, Douglas Buck, of Indianapolis, and several nieces and nephews

Services will be at 1 p.m. Wednesday at Roselawn Funeral Hom, Terre Haute, with visitation Wednesday from 11 a.m.-1 p.m. at the funeral home. Burial will follow the services at Roselawn Memorial Park. Officiating will be Pastor Jeffrey Buck.

Online condolences can be made at www.roselawnfuneralhome.com.