Heritage Wall plaque to honor contributions made by Extension Homemakers 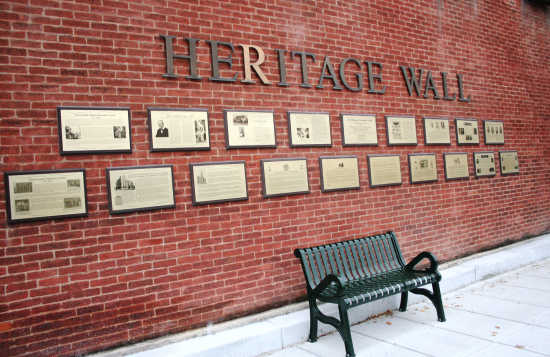 Another plaque is being added to the Heritage Wall on South Vine Street in honor of the Extension Homemakers. (File photo)

A newly-minted plaque destined for the Heritage Wall along South Vine Street in downtown Greencastle will honor the Putnam County Purdue Extension Homemakers for significantly enhancing the quality of life in this area for many decades.

President Sharon Baldwin will be presented with the cartouche commemorating their century of history by Mike Murphy, president of the Heritage Preservation Society in a ceremony taking place at 6 p.m. Friday, Nov. 6 in the Community Building at the Putnam County Fairgrounds.

The event will be part of opening-day festivities at the 37th annual Arts and Crafts Show sponsored by the Past Presidents Club of the Extension Homemakers, chaired by Brenda Heacock. Show hours are 4-8 p.m. on Friday and 9 a.m.-3 p.m. on Saturday.

The Homemakers' plaque details the founding of the organization in 1913, and the group's ongoing dedication to bettering, educating and serving their community both locally and globally.

Beginning with only 20 members, their numbers eventually grew to more than 500 by the 1950s. Projects through the years have ranged from making bandages during World War I to offering classes in food preservation and the use of computers.

The tribute will be mounted on the Heritage Wall on May 6, 2016. As well as being part of the initial First Friday events of the year, the dedication will be in conjunction with the celebration of May as National Heritage Preservation month.

The Heritage Wall was established in 2001 as a means to recognize contributions to and promote interest in the history of Putnam County. Subjects vary from prominent personages such as Eli Lilly, to the notorious visit of John Dillinger. Other inscriptions honor structures, including the now-gone Marshall Laboratory at DePauw University, or long-running institutions, like Eitel's Flowers.

The commemorative wall is curated by HPS, and is made possible by the generosity of Lester and Judy Wilson, who have allowed use of the exterior of their building at the corner of Washington and Vine streets where their photography studio is located.