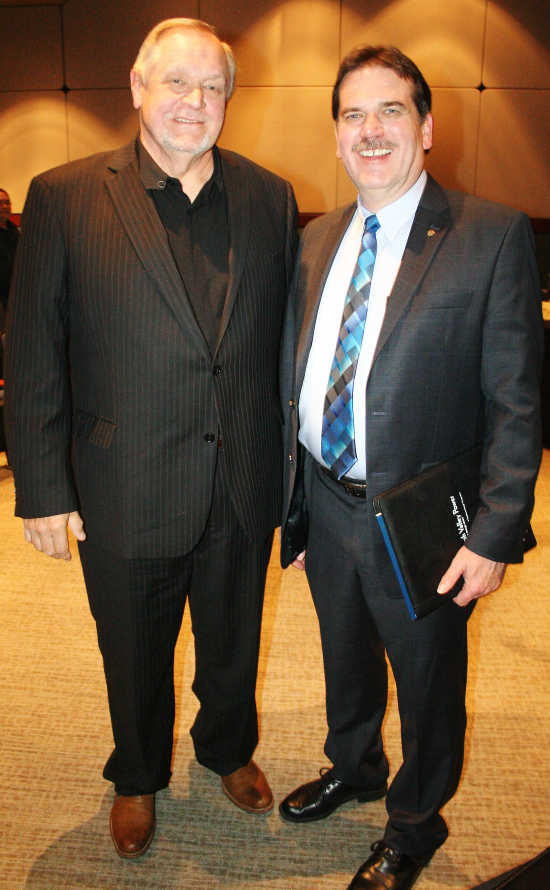 Greencastle mayoral candidates Haywood Ware (left), the Republican hopeful, and Bill Dory, the Democrat candidate, chat after the recent League of Women Voters Candidates Forum event. On Tuesday, one of the two men will be elected to suceeed Sue Murray, who did not seek re-election after eight years as mayor. (Banner Graphic/ERIC BERNSEE)

When the proverbial smoke clears and the dust settles as political rhetoric goes silent, City of Greencastle voters will elect a new mayor and put a majority of new faces on the City Council.

That much is assured as voters head to the polls Tuesday between 6 a.m. and 6 p.m. to elect a successor to two-term Mayor Sue Murray, along with a clerk-treasurer, and for the first time ever, seven City Council members.

And if you think your vote isn't important, heed the warning the city's longest-serving councilman, Mark Hammer, offered at the conclusion of the latest Candidates Forum.

"Don't forget," said Hammer, who is currently the Second Ward councilman but running for one of the three at-large seats this election, "one vote does matter as we learned eight years ago when the Third Ward ended in a deadheat."

That 2007 occasion was actually one of two instances in recent city election history in which one vote could have made the difference in the outcome.

In the City Council race eight years ago, Democrat Jinsie Bingham and Republican Eric Birt tied for the Third Ward seat with 190 votes and the outcome had to be settled by a vote of the sitting Council (composed of four Democrats and one Republican at the time) that put Bingham on the panel.

In 1983, the city primary produced as close a race for the Democrat mayoral nominee as possible.

When all the counting was done, local store owner Ben Cannon had outlasted businessman Clair Williams by one single vote. Williams declined a recount and Cannon went on to lose to Republican Gerald Warren in the general election later that fall.

This year, the mayoral race pits (in alphabetical order) Democrat Bill Dory vs. Republican Haywood Ware. Dory was uncontested in the primary, while Ware easily defeated Jim Wright on the GOP ballot.

In one of only three city contests involving an incumbent Tuesday, Clerk-Treasurer Lynda Dunbar, a Republican, is seeking a second term up against a challenge from Democrat Eric Wolfe.

Meanwhile, city voters will be casting ballots for three at-large Council members for the first time Tuesday as the Council is being expanded to seven since the city has topped the 10,000-population mark. The city's current at-large councilor, Phyllis Rokicki, is not seeking another term.

In her stead, five men are seeking three spots. They are: Hammer, Wally Hinkle and Harry Maginity, Republicans, and Gary Lemon and David Murray, Democrats.

The other City Council races on the ballot are: