PLAINFIELD -- On a Halloween night when costumed superheroes were a dime a dozen, some real heroes basked in long-overdue glory.

More pulse-raising than any old "Thriller" flash mob ever dreamt of being, the arrival of nearly 200 American wartime veterans back from an Honor Flight visit to Washington, D.C., Saturday had everyone in the Plainfield High School gym standing and screaming and choking back emotions. 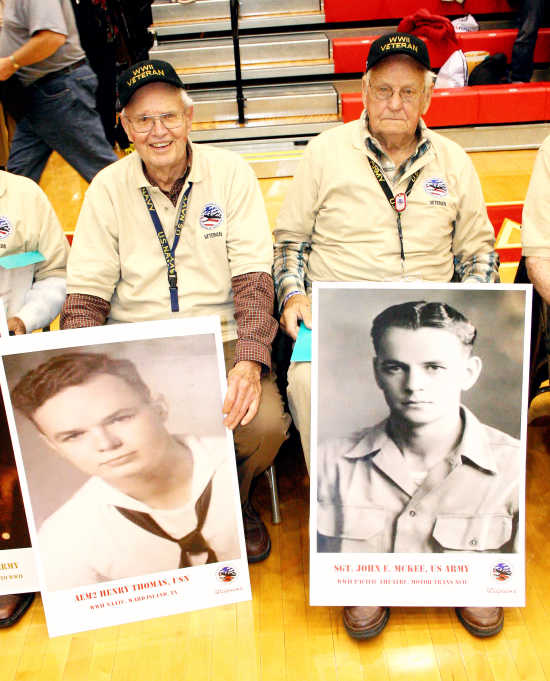 Returning from their Honor Flight adventure to Washington Saturday night, Greencastle residents Henry Thomas (left) and John McKee sit side by side with poster-size shots of their military days. (Banner Graphic/ERIC BERNSEE)

Three Greencastle men -- John McKee, Henry Thomas and Bernie Wahl -- were among those weary but appreciative veterans returning to a virtual lovefest of handshakes, hugs and even kisses and signs thanking them for their service in many creative and red-white-and-blue ways.

"Superheroes don't always wear tights," master of ceremonies Ryan Core told about 1,500 well-wishers waiting to greet the true American heroes arriving home after a long day of visiting the nation's capital. "These superheroes are real ... the men and women who literally saved the world."

Yet to a man, they told how they don't really feel like heroes, noting that most of our real heroes did not make it back from those wars.

Taking part in the Honor Flight effort meant getting up about 1 a.m. Saturday for the local veterans, who convened at Plainfield High School at 4 a.m. to leave for the Indianapolis Airport and catch a 90-minute flight to Washington.

Their day included visits to the World War II, Vietnam and Korean War memorials, as well as a trip to Arlington National Cemetery where they witnessed a moving version of the changing of the guard at the Tomb of the Unknown Soldier.

"That was a long, long fun day. A great trip," 89-year-old John McKee said after returning home to Greencastle about midnight.

The highlight of the day, agreed both McKee and Henry Thomas -- who will turn 91 next month -- was seeing the World War II Memorial. Both were equally amazed at Arlington National Cemetery.

"I didn't realize how big it was," offered Thomas, a Navy aviation electronics technician's mate who didn't get overseas during World War II but spent three years stateside (including one in radio/radar training).

For McKee -- who spent 17 months in Japan with the Army occupation forces after being deployed to the Pacific and reaching Japan on July 3, 1945 and The Philippines on Aug. 3 before the Japanese formally surrendered less than two weeks later -- it was the changing of the guard ceremony that produced the most emotion.

"It was so amazing. So precise, you can't imagine," McKee said, adding that some 200-300 people were there, watching in silence.

"You could've heard a pin drop," he said. "They really stressed quiet and there was no noise at all."

In contrast, there was the reception at Plainfield High School where the veterans were introduced as they entered one by one with poster-sized photos of their glory days held high above their head as they walked through the adoring crowd.

Wahl, a U.S. Navy veteran of World War II, took advantage of a wheelchair ride, pushed by friend Bunny Carrel, as he entered after the exhausting day.

Spotting the camera, the Greencastle man asked in surprise, "What are you doing here?'

"Taking pictures of heroes like you," Wahl was told.

Wahl, a Navy coxswain, and the others were in for another surprise momentarily, as a pair of young ladies in period costume -- "the kissing girls" -- bent down and planted a big kiss on each cheek as he passed by.

"Don't put that in the paper," he smiled and laughed, nearly speechless with bright red lipstick easily visible on each cheek.

McKee called the reception "unreal," noting that there was never any such celebration when he actually came home from the war.

"That reception, oh my," McKee gushed, noting his two sons, Mark and Maurice, and their wives and their children and grandchildren were all at the school to greet him, making it all the more special.

"That was the biggest surprise of the whole trip," agreed Thomas, who found wife Caroline, son Henry and daughter Susan along with their spouses and children waiting for him

And the reaction was much the same throughout the trip, McKee said. 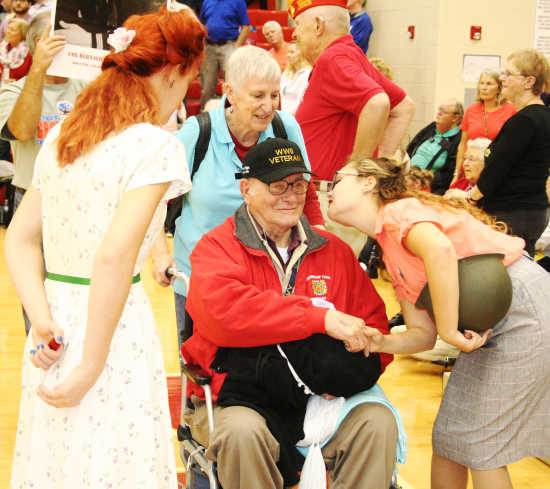 U.S. Navy World War II veteran Bernie Wahl gets a kiss on the cheek as he makes his way through the Plainfield gym. Banner Graphic/ERIC BERNSEE)

"Everybody wanted to shake your hand, wherever we went, shake your hand and thank you for your service," McKee said, adding that the veterans even engaged in a surprise mail call.

"I had 40 letters in my package," he said in amazement, "some from people I didn't even know."

"Everything was handled absolutely superbly," he added. "There wasn't a hitch all day."

McKee, meanwhile, was amazed at how royally the veterans were all treated throughout the program, taking the trip of a lifetime for free.

Each veteran was accompanied by a guardian, sometimes a relative, most times not, each of whom paid their own way for the honor of going along on the trip.

Indy Honor Flight is a non-profit organization created solely to honor Indiana's veterans for their sacrifices by transporting World War II, Korean War and even some Vietnam War veterans to Washington, D.C., to visit and reflect at the war memorials there.

Honor Flight founder Grant Thompson took a few moments to summarize the day, addressing the veterans seated on the gym floor in front of him after parading through the facility.

"I'm really just the grandson of an American veteran," he said after a huge round of applause erupted as his 14th and 15th Honor Flight efforts reached their dramatic conclusion Saturday night.

"I just want to say, 'We love you. We'll never forget what you gave us, and we're truly grateful for that.'"