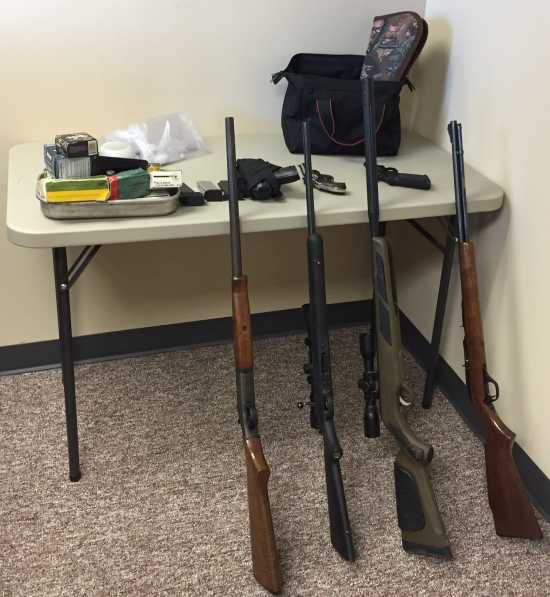 Two people were housed at the Putnam County Jail Monday afternoon following a late-morning pursuit involving a drug overdose, a substantial amount of suspected methamphetamine and more than a half-dozen firearms.

After identifying Goff, Slover radioed Lt. Dwight Simmons, who joined him in the area.

While following Goff, the deputies observed several traffic violations before attempting a traffic stop in the area of 400 East and 300 North.

A short pursuit followed, with the vehicle fleeing southbound from Wildwood Bridge before heading west for less than a mile on County Road 275 North.

The vehicle then came to an abrupt halt, with the doors opening and men fleeing from both sides.

Simmons caught Goff, 37, of Coatesville, in a woodline about 100 yards from the car, also noticing him drop a package of suspected methamphetamine.

Slover did not pursue the front seat passenger, instead stopping to tend to a woman in the backseat who appeared to be in the throes of a drug overdose.

Placing a call for Operation Life, Slover and medics were able to revive the woman, 32-year-old Jessica Keck of Terre Haute. She signed a statement of release and was taken to the Putnam County Jail.

A search of the car revealed the presence of multiple handguns and rifles, along with ammunition. The weapons are believed stolen, as at least one had its serial number obliterated.

One of the pistols was loaded and under the driver's seat. Simmons said it was fortunate that Goff did not draw the gun during the incident.

"It's a good thing he left it where it was," Simmons said.

Based on the investigation, Goff was booked into the jail on charges of possession of stolen property and two counts of resisting law enforcement.

"He's a good person to have off the road," Simmons said.

The second man in the car had not been apprehended as of late Monday afternoon, but officers were confident they had identified him.

Although Keck told officers she did not remember anything about the incident, the car was hers, so she faces charges of possession of stolen property and possession of a syringe.

Officers were in contact with Deputy Prosecutor Justin Long throughout the incident. With no one in the office for Election Day on Tuesday, the Prosecutor's Office is expected to formally file charges on Wednesday.