After an exciting first quarter, the South Putnam offense stalled out and the North Vermillion football team took the win and the sectional championship 48-20.

"When you get to this point and you are playing for a championship, you're playing top quality opponents," SPHS coach Nathan Aker said. "Those guys are well-coached. They've got some outstanding football players. In the end we just didn't do what we had to do to win the game."

The First quarter saw some fireworks as each team put up some big touchdowns in the game. North Vermillion took advantage of some poor tackling by the Eagles to strike first. 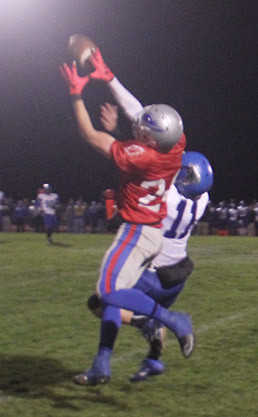 Jimmy Rutter climbs the ladder and fights off the Falcon defender for the catch and the 65-yard touchdown reception to follow in the first quarter. (Banner Graphic/JAY LOCKETT)
Order this photo

But South Putnam struck back when Grady McHugh found a wide-open Daniel Grundlock to score the touchdown and tie the score at seven.

The fast-paced scoring continued when the Falcons scored again, but South Putnam was quick to strike back.

While North Vermillion played an efficient ground game that got to the edge and picked up good yardage, the Eagles stayed in the air and this time McHugh found Jimmy Rutter, who pulled down the pass and shook off the defender for a 65-yard touchdown reception. 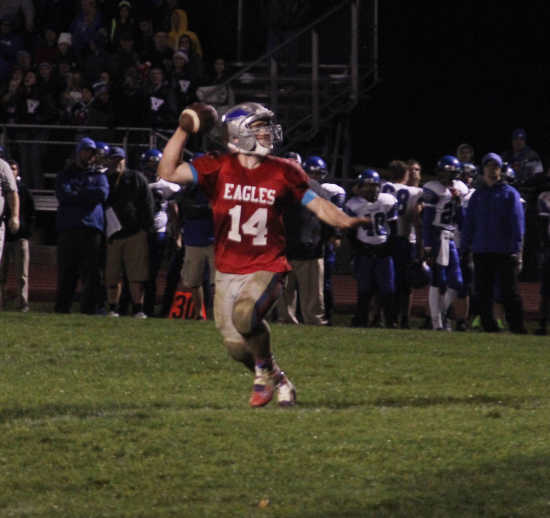 Kyle Shaffer takes the halfback pass and throws a touchdown to Jimmy Rutter in the fourth quarter. (Banner Graphic/JAY LOCKETT)
Order this photo

"Jimmy Rutter did what he does," Aker said. "Making plays that are just phenomenal. Grady did a great job running the offense and leading."

North Vermillion scored again and the Eagle offense began to struggle a bit while the Falcons continued to score.

"Our kids expect victory," Aker said. "They expect to win. They've done a great job preparing all year for every challenge. I'm extremely proud of how they handle things and how they fight back." 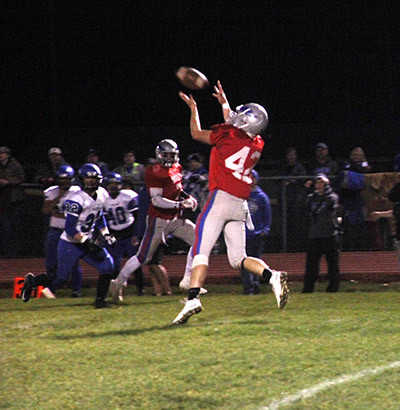 Grady McHugh found a wide open Danny Grundlock who took the 44 yard pass to the house for the first Eagle score of the night. (Banner Graphic/JAY LOCKETT)
Order this photo

The Eagles did fight back as North Vermillion took control on the scoreboard. The Falcons returned an interception for a touchdown, and just when it looked like the Eagles would have to punt, Aker called a fake-punt pass that McHugh put right on the number for Christian Zeffel.

After another Eagle turnover, it was Grundlock who returned the favor picking off a pass on the goal line stalling the Falcon drive.

"Danny played defense like a madman all year," Aker said. "He made a beaucoup amount of tackles. He set a (single) season solo tackle record here. To do that with the defenses we've had here for the last 40 yeas it's a big deal. Danny needs to be celebrated for that."

The Falcons were able to take full control of the game in the third quarter as they scored 17 unanswered points. Blocking was tough for the Eagle offense and on defense missed tackles doomed South Putnam.

South Putnam was able to get some stops in the fourth quarter but the Eagles couldn't earn any scores until late.

Kyle Shaffer, who led the Eagles with 90 rushing yards, took a halfback toss and used two pump fakes to throw off the Falcon defense before hitting Rutter in the endzone for the final score.

"Even tonight they were playing right up to the very end," Aker sadi. "We just came up a little short. When you run into a quality opponent, you just can't do some of the things we do and expect to come out on top. It was two outstanding football teams going at it and we just came up short."

The Eagles may have came up short on the scoreboard, but when it comes to character, Aker said everyone on the team has something to give from the senior class to the trainers and managers.

"Nick Duggan, our sophomore manager is tremendous," Aker said. "When Nick's missing from practice coaches are scrambling. He does everything for us - the water and the balls - he's tremendous."

Aker was also very appreciative of his seniors, some of whom have left a lasting mark on the football program.

"Joey (Masters) set the career sack record," Aker said. "That's huge. What a great kid I think he invented the running across the field to signify overtime and one more. Will Cruse gave it all as a two-way starter. He's going on to do some great things. Brandon Geirke making that switch to tight end was phenomenal. Nathan Sheets what a great kid. He's a high-character kid. Can't wait to see what he does in the future.

"Matt Schnepp was an awesome offensive linemen," Aker continued. "He jumped in at center and tight end. He just did an outstanding job."

Aker said his underclassmen are ready to take up the torch that has been left by the classes before them.

"They'll do it," Aker said. "They've done it. The seniors have laid the groundwork. The underclassmen will step into that role. They are some big shoes to fill."