She was born Feb. 11, 1924 in Indianapolis, to James and Maude (Bittles) Heaney, but was lovingly reared by her aunt and uncle, Achsa (Heaney) and Ed Cassity. 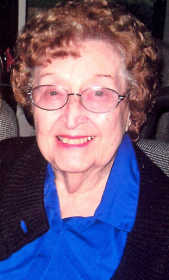 She married Cecil C. English, and they enjoyed 65 years together, traveling extensively, until he preceded her in death on March 26, 2007.

Vera retired in 1986 from South Putnam High School, where she had taught for 20 years. She had previously taught at Ben Davis, Danville and New Winchester high schools.

She was a member of the Washburn Chapter of DAR, the Bainbridge Christian Church and the Order of Eastern Star of Bainbridge, Groveland and Greencastle.

She was preceded in death by her parents; husband; a brother, Charles Heaney; and a sister, Helen Doyle.

Funeral services will be held at 11 a.m. on Wednesday, Nov. 11 at Hopkins-Rector Funeral Home, Greencastle. Interment will follow at Bainbridge Cemetery.

The family will receive friends on Tuesday, Nov. 10 at the funeral home from 5-8 p.m.

Memorial contributions may be made in memory to the Humane Society of Putnam County.