Staggers, deputy state chaplain for the Indiana National Guard and commander of Greencastle VFW Post 1550, addressed a Veterans Day crowd on the south side of the Putnam County Courthouse by saying it is the responsibility of the military to "reach out and educate you on days like this." 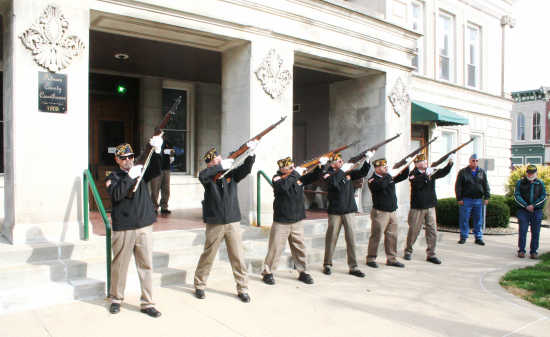 Members of the Greencastle VFW and American Legion Honor Guard fire the traditional Veterans Day salute on the south side of the Putnam County Courthouse Wednesday morning as Lt. Col. Jim Staggers of Greencastle addresses the local gathering, speaking to the unique bond of the American military. Banner Graphic/ERIC BERNSEE
Order this photo

He explained that after four deployments across the world -- including a recent six-week stint to Slovakia -- he knows of "no other bond like ours anywhere in the whole world." 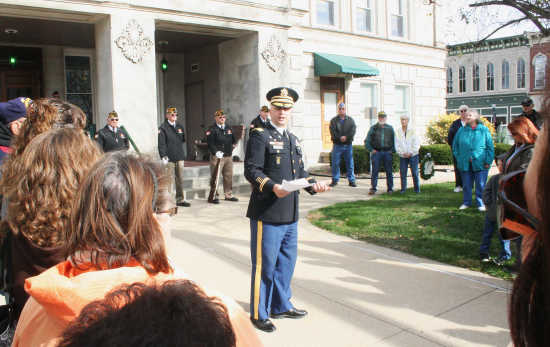 It is a special bond, uniquely American, that motivates the U.S. military to "respond with strength, purpose and resolve," he stressed.

"May we remain forever bonded by our service and forever indebted to one another's service," Staggers added.

And as indicative of that bond, Staggers related a story from his recent tour of duty with the Indiana National Guard in Slovakia, while warning that the "world is not becoming a safer place," regardless of what TV news and national newspaper columnists may say.

"Russia," he said, "is in a full-scale war with Ukraine."

And with that backdrop, Staggers told of a "75-ish" Slovak native who came up to the American troops, offering them an old-style, five-fingered baseball glove from the 1930s or '40s.

The man was so overcome with emotion to see American soldiers in his hometown for the first time since World War II, Staggers said, that he handed them the baseball glove, a pancake pocket model like fathers and coaches of previous eras used to teach kids to catch with two hands.

He had received it when he was just a child in Slovakia from American GIs who came to liberate his town from the Nazis. During World War II, a GI handed the boy the glove and taught him how to catch a baseball. When it was time for American soldiers to leave the area, the boy tried to give it back, but the GI told him to give the mitt to the next American soldier he saw.

"And he held onto that glove for about 70 years in order to give it back to an American soldier," Staggers noted.

Veterans, he said, understand combat's lasting impact in a way others do not.

"We know that this Veterans Day we have soldiers, sailors, airmen and Marines still recovering in hospitals from wounds with which they will live for the rest of their lives.

"We all process and experience combat differently, but we must join one another in that experience, we must be there for one another, not just on Veterans Day buy every day," he added.

American veterans, Staggers said, also have a different bond with those patriots who have always supported them.

"I want to thank those of you who are not veterans so much for observing this event today. Your attendance and support is so important to our country."

Unfortunately, he continued, the disconnect between soldier and civilian has never been greater.

"And that is our burden. It is the responsibility of those of us serving to close the gaps of knowledge and communication between both sides.

"Our Army is perhaps the most trusted and respected institutions in the country. But America does not really know its Army well enough," Staggers added.

However, Indiana, he said proudly, has given more of its citizenry to the military than any state in history.

Yet most Americans "do not have a family member who has served," he said. "Very few have had the opportunity to work with our Wounded Warriors or our Gold Star Family members, who have lost a son, daughter, mother or father to war.

"This is not the fault of this nation's citizenry. It is largely the result of our Army isolating itself from the rest of the nation. Most of America's major population centers have never been around the military. Large population centers in the Northeast and the West Coast area underrepresented by our Army."

And that has had a lasting effect, he said.

"When fewer Americans see the wounds of war up close, the struggles of our veterans become something remote," Staggers said. "When fewer citizens understand the requirements of our Army, they will be less inclined to push their representatives to provide the kind of funding our soldiers, families and retirees need. When only a small minority of business leaders have personal relationships with veterans, corporate America will be less inclined to hire veterans when they leave service."

It is in the best interest of our veterans and for those in uniform to work toward and maintain good civil-military relations, he suggested. It is up to those who wear the uniform to ensure that the military will have the support and trust of the American people.

"On this Veterans Day, I ask that all veterans commit to better engaging with our communities and our fellow citizens," Staggers said, "that we tell our story and become better connected to the society which we serve. We owe it to all veterans to do so.

"My prayer," he concluded, "is that we all become closer as a community and all those values you cherish will never be taken for granted."