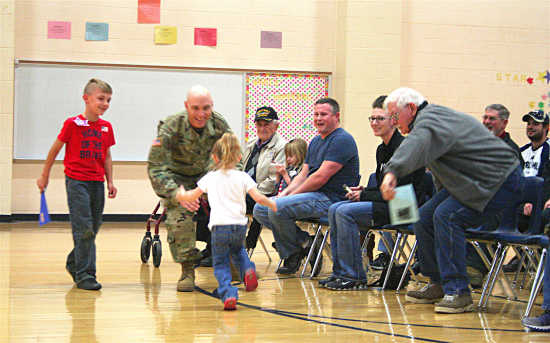 BAINBRIDGE -- Veterans Day is a time for remembrance, gratitude and giving thanks to all those who have sacrificed so much to protect this great nation.

The Veterans Day ceremonies at Bainbridge Elementary effortlessly put this notion display Wednesday afternoon when students, residents and veterans alike gathered to salute the flag and pay homage to those who have paid the ultimate sacrifice.

In fact, one very special surprise awaited second-grader Jesse Martin as he presented his Veterans Day essay to the audience -- his father, a battery master for the U.S. Army, was waiting in the wings to surprise him in front of the entire school and dozens of fellow veterans.

Staff Sgt. Frank Carroll, who has been stationed at Osan Air Base in South Korea, flew back to Indiana on Wednesday to not only see his family, but to take them back with him. Before South Korea, Carroll had been deployed to a number of countries, including Suadi Arabia, Kuwait, Israel and Poland.

"We are moving to South Korea on Nov. 13 and Nov. 12 will be Jesse's last day of school," mother Cassie Carroll said. "Jesse hasn't seen (Frank) in months, he knows he's coming but doesn't know he's coming to the school for the program."

About midway through the event, Martin stood at the podium and began presenting his essay. He described his military family, saying how proud he was of his father and what he has done.

With a little help from Principal Rodney Simpson, Jesse noticed someone new standing behind the veterans.

"Do you recognize that guy over there?" Simpson asked.

Martin's expression told the whole story as smiles crossed from ear to ear and father and son met in the middle of the gymnasium floor amidst a thunderous standing ovation. The rest of the Carroll family was also in attendance as Audrey and Alana Martin came running along for another embrace. 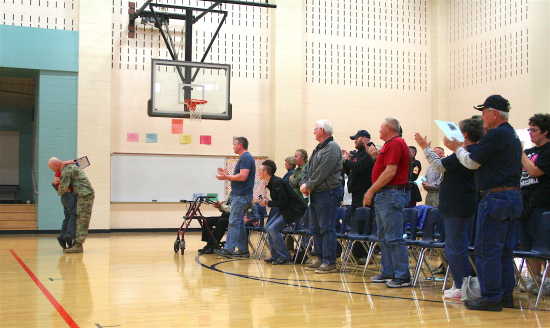 "It was all my wife's doing," Frank Carroll said. "Luckily we found out that I would be home for the time frame."

Students showed their appreciation through music and crafts as dozens of veterans from all branches of the military watched. Whether in uniform or not, each veteran received gratitude in the form of songs and keepsakes from the children.

"We are here today to honor our veterans," Simpson said. "Thank you very much for your service."