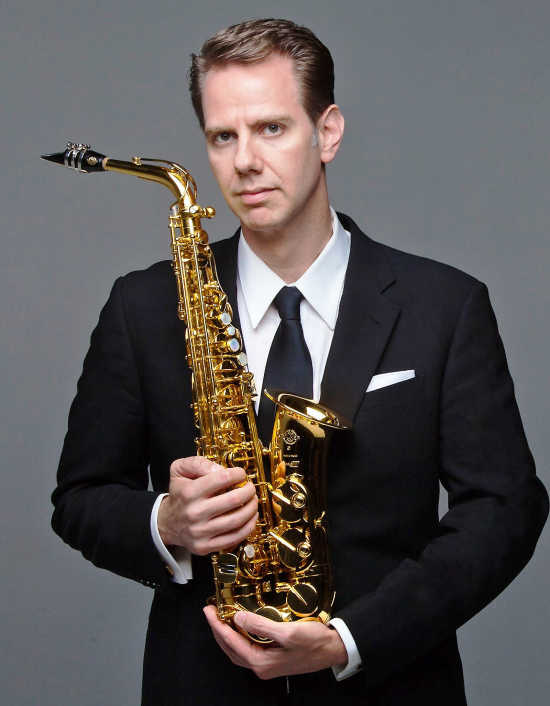 Hailed by The New York Times as a "virtuoso...one of the foremost saxophonists of his generation," called "brilliant" by The Guardian (UK), and "a sterling saxophonist" by The Baltimore Sun, Timothy McAllister will perform Sunday. Nov. 15 at DePauw University.

With collaborative pianist Liz Ames, McAllister will play at 7:30 p.m. in the Thompson Recital Hall within DePauw's Green Center for the Performing Arts.

A champion of contemporary music and member of the renowned PRISM Quartet, he is credited with dozens of recordings and more than 200 premieres of new compositions by eminent and emerging composers worldwide.

Among recent career highlights is his "Deutsche Grammophone" DVD release of the world premiere of John Adams's "City Noir," filmed as part of Gustavo Dudamel's inaugural concert as music director of the Los Angeles Philharmonic.

In 2013, McAllister gave the world premiere of the "Adams Saxophone Concerto" with the Sydney Symphony Orchestra under the baton of the composer in the Sydney Opera House, followed by critically acclaimed U.S. premieres with Marin Alsop and the Baltimore Symphony Orchestra and the St. Louis Symphony, conducted by David Roberston.

Nonesuch Records released the recording of the Adams Concerto with McAllister and St. Louis Symphony in May 2014, which won the 2015 Grammy Award for "Best Orchestral Performance."

"As a longtime friend and colleague, it has always been a privilege to listen to McAllister's artistry and technical virtuosity," said Scotty Stepp, who directs the saxophone studio at the DePauw School of Music. "His performance on Sunday will demonstrate a depth of musicianship that all SoM concert goers will appreciate."

A renowned teacher of his instrument, McAllister has served as professor of saxophone at Northwestern University and a Valade Artist Fellow for the Interlochen Center for the Arts, and he is a clinician for the Conn-Selmer and D'Addario companies.

In September 2014, he joined the faculty of the University of Michigan School of Music, succeeding his legendary mentor Donald Sinta.

General admission tickets to Sunday's Faculty Select Series performance are $5. Admission for seniors, children and all students is free.