Two steps forward, one step back for Tigers 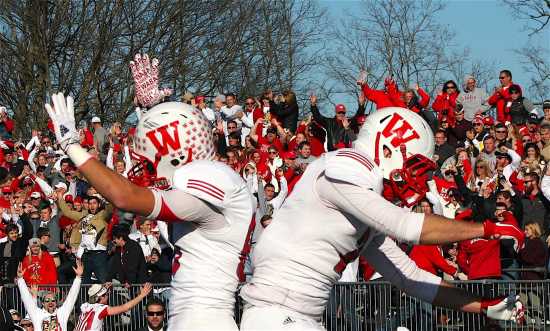 Wabash celebrations in the Monon Bell Classic have become all too common for DePauw fans in recent years. (Banner Graphic/NICK WILSON)

It wasn't supposed to be like this. Not this year.

DePauw came into its annual rivalry game against Wabash with its best team since its 2010 playoff berth, maybe better.

Sure, Wabash was favored to retain the Monon Bell, but it was gonna be close, right?

That's what the "experts" said, this guy included.

As a Wabash student who later came to this town professionally and had to become neutral(ish) in this series, I thought the time had come. Six straight wins is enough. The pendulum always swings back in this series, right?

That's what I thought the last 15 years of watching this series had taught me.

Instead, I think maybe the Little Giants were hearing what everybody was saying as well. They were listening, seething and scheming.

That scheming netted their defense three turnovers against a Tiger team that had committed just six in the previous nine games.

That scheming also garnered 355 yards rushing against what had been the seventh-ranked rushing defense in Division III. Impressively, Wabash senior Mason Zurek, who's about as easy to tackle as a 225-pound bowling ball, set a new Monon Bell Classic record with 278 rushing yards.

And let's be honest, this game got out of hand early. Sure, DePauw kept it close for much of the first half, but when Matt Hunt was intercepted on the game's first possession, I was pretty sure DePauw was in for a long day.

Then there was the possession late in the first quarter, DePauw putting together an impressive drive that I thought would tie the game at 14. Instead, Wabash's Connor Ludwig stripped Jason Kirchhoff of the ball and Wabash recovered.

In a sense, DePauw never recovered. It ended with a seventh straight Monon loss and a fourth straight senior class who never saw a DePauw victory in the game.

I heard a closer observer of this series than myself say recently that DePauw hadn't scored a "meaningful touchdown" in this series in five years. I think we can say that streak ended on Saturday when Hunt found younger brother Andy in the first quarter to make it 14-7 Wabash.

It became even more meaningful when Wabash punted on the ensuing possession, but DePauw couldn't capitalize.

I'm confident the worm is about to turn in this series, but looking at Saturday's final score it's hard to believe it.

But look at how the Tigers played in stretches and you can see it. In short bursts, at least, Matt Hunt had the DePauw offense humming like it did for much of the year.

I spent the day in the Wabash stands (as well as the Wabash tailgate area that was halfway to Mansfield) and I can tell you that the junior quarterback makes Wabash fans uncomfortable.

"We have to face this guy again next year? Man, he's pretty good."

And so I summon Harry Caray as I sit here writing basically the same column about DePauw as I did last year.

But I believe it even more now than I did a year ago.

I've been watching NCAC football since Wabash joined back in 1999, and for the last 10 years or so, it's pretty much been Wittenberg, Wabash and then everybody else.

Just four years after joining the conference, the Tigers have made it Wabash, Wittenberg, DePauw and then everybody else. It's hard for me to express how impressive that is. DePauw's second-place finish in the conference is huge.

The next step, though, is reaching the top and that means taking down the Little Giants.

It's the football team's chance to prove that "DePauw never quits."

The next Monon Bell Classic is set for Saturday, Nov. 19, 2016 in Crawfordsville. That's 370 days to be ready to answer the bell.