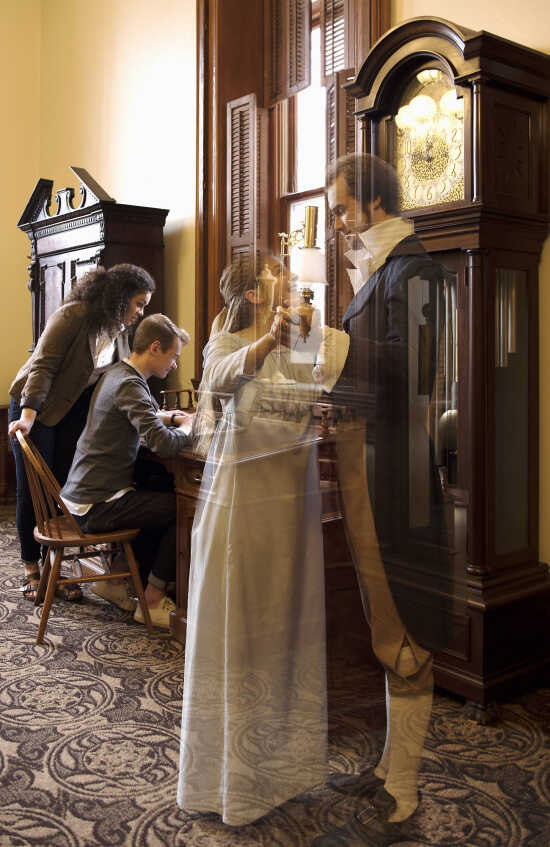 "Arcadia," described by the New York Times in 1995 as Tom Stoppard's "richest, most ravishing comedy to date, a play of wit, intellect, language, brio and, new for him, emotion," is coming to the DePauw University stage.

DePauw Theatre will present a production of "Arcadia," which is, as the Times' Vincent Canby opined, "like a dream of levitation: you're instantaneously aloft, soaring, banking, doing loop-the-loops and then, when you think you're about to plummet to earth, swooping to a gentle touchdown of not easily described sweetness and sorrow."

The DePauw production, directed by Amy Hayes, part-time assistant professor of communication and theater, opens Thursday, Nov. 19 at 7:30 p.m. in Moore Theatre of the Judson and Joyce Green Center for the Performing Arts, and will be followed by a reception in the Great Hall.

"Arcadia" follows the lives of two sets of characters who live in the same house nearly 200 years apart -- in the early 1800s and today.

In the past, Thomasina is a 13-year-old girl ahead of her time academically, tutored by Septimus, a friend of Lord Byron. In the present, a writer and a literature professor are studying the life of Byron when they discover the history of the house's predecessors.

First opening in London in 1993, "Arcadia" featured an all-star cast that included Bill Nighy as Bernard Nightingale, the literature professor. In 1995 the Broadway continuation of the play received a Tony nomination for Best Play, followed by Best Revival of a Play nomination in 2011.

Tickets for the DPU production are $6 for general admission and $3 for students. They are available online for purchase at www.brownpapertickets.com/event/2461315.