It may be difficult to imagine a time when things didn't go better with Coke, but 100 years ago that was essentially true.

Andthanks to a Terre Haute company and some Putnam County sandstone, it has never been much of a concern again.

Original contour Coca-Cola bottle as designed and patented in 1915.

One hundred years ago this week, the Coca-Cola bottle -- one of the most recognized objects of the 20th century -- was awarded a U.S. patent for its distinctive bottle and coloring. That came on Nov. 16, 1915.

That was when Georgia businessman Asa Griggs Candler had set his sights on making Coke the most popular cola in the U.S. Candler had become Coca-Cola's majority shareholder in 1888, just two years after the soft drink was invented.

However, by 1915, he found his market share dwindling in competition with dozens of other brown-colored colas dispensed in identical glass bottles. He decided to conduct a national contest for a new bottle design that would set Coke apart and label it as a premium product.

In addition, Coca-Cola wanted a bottle that could be recognized even by touch in the dark, and shaped in such a way that even if broken, someone could tell immediately what it was.

And now, from Kathmandu to Cloverdale and Indiana to Istanbul, Coca-Cola is known the world over for its familiar red script logo, ingeniously endearing TV and print advertising, and of course -- that unique green glass bottle.

While the shape of the bottle is an interesting tale all its own, it is the green hue whose roots can be traced to Putnam County. More specifically, Fern Cliff, west of Greencastle in Madison Township.

Interestingly, the reason for the original Coke bottle's green hue has nothing to do with product planning. Apparently, the green tint simply resulted from minerals present in the Putnam County sand used by Root Glass Co to make the glass at its 160-acre Fern Cliff site.

The historical Putnam County volume "Our Past, Their Present" by John Baughman, professor emeritus of history at DePauw University, details how the Root Glass Co. bought the land at Fern Cliff in the early 1900s to use the sandstone of the local cliffs for glass making.

Root Glass built a plant on site (the foundation reportedly can still be seen) at the foot of the sandstone cliffs (once covered by ferns, hence the name, or so the story goes). The spur of a nearby railroad even serviced the site, shipping the washed sand product to Terre Haute to be melted and made into bottles.

And that includes the original bottle whose design and color that are actually registered trademarks. It was 100 years ago Monday that the U.S. Patent Office issued design patent No. 48,160 to the Root Glass Co. for the legendary bottle.

In its heyday, the Fern Cliff quarry reportedly operated day and night, winter, spring, summer and fall. Over approximately a 10-year period, the Root Co. took some 20,000 tons of sandstone a year out of the Putnam County site.

As a side note, the existence of Fern Cliff has been traced backed nearly 200 million years with the geological formations there resulting from it once being the shore of an inland sea. It was also known to have been the home of a Shawnee Indian tribe in the 1800s. 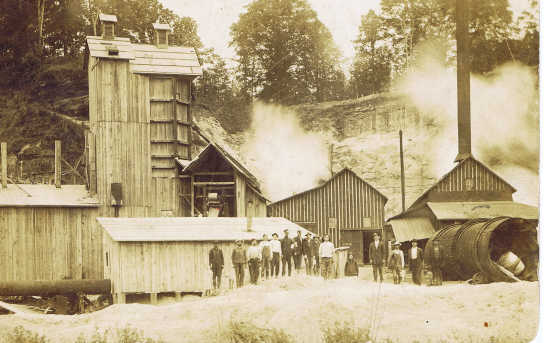 Sandstone quarried in Putnam County at the Root Glass Co. quarry operation at Fern Cliff, west of Greencastle, produced the greenish hue to the original Coke bottle that has continued to this day.

Meanwhile, the Coke bottle owes its distinctive shape to that 1915 contest wherein the company sought a unique bottle it could trademark to protect its eroding brand identity. And today Coke's stylish bottle is a symbol known across the street and around the world.

As designed, the contour green glass bottle represented in the original patent would have been so top-heavy it would not stand up. However, when Coca-Cola actually introduced its bottles the next year, in 1916, the design had been slightly altered. Yet those iconic curves drawn in the original patent are still recognizable today.

The bottle itself was created by Root designer Earl R. Dean. He and his design team decided to base its design on one of two ingredients in the soda -- the cocoa leaf or the kola nut -- after being inspired by an encyclopedia picture of the gourd-shaped cocoa pod.

And by 1920, the contour bottle had become synonymous with Coca-Cola Co. -- proving the real thing is knowing things go better with the right design.