South Putnam High School to roll out Chromebooks for 1:1 next year 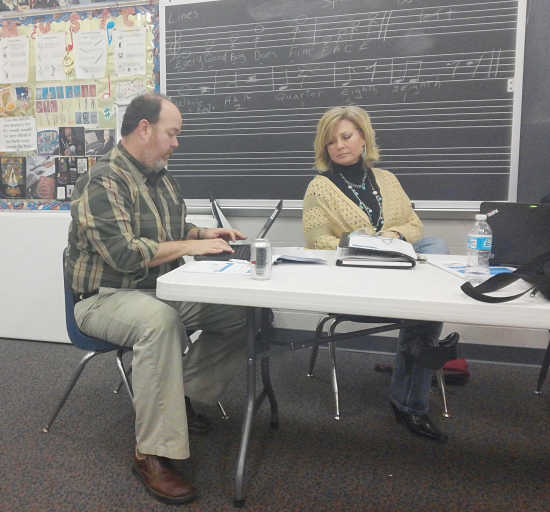 South Putnam School Board members Anthony Heavin and Angie Nichols check the features on the new Chromebooks, which will be in the hands of high schoolers in the fall. (Banner Graphic/SABRINA WESTFALL)
Order this photo

South Putnam High School students will be receiving Chromebooks at the beginning of the 2016-17 school year as part of the 1:1 initiative.

The school board voted Monday to commit to buying Lenovo ThinkPad Yoga 11e Chromebooks and hard-shelled Brenthaven carrying sleeves for the first phase of the 1:1 roll-out. The goal is to get computers in the hand of every student, starting with the high schoolers.

In addition to the commitment, board members voted to approve the purchase of 54 computers and cases for teachers to begin using at the beginning of the year.

Technology Integration Director Tona Gardner said it is important to give teachers a semester to use the technology before it is placed in the hands of students so they can prepare for issues and questions.

The estimated cost for the teacher devices is $393 each with the management programming, and just over $30 each for the cases, totaling a $23,077.44 expense to the school.

Gardner said several devices have been considered in the last year, but the Teacher Technology Team unanimously decided the Chromebook would best meet the needs of the classrooms, students and parents.

One of the biggest concerns for everyone, especially parents, has been the cost of putting devices in the hands of students, Gardner explained. She added the ThinkPad has military-grade durability specifications and was the best price with all needs being met.

While the exact cost to parents has not been determined because there are still several questions to be answered, Gardner stressed it is important to remember the cost of the device will be split up.

"Think about this like a textbook. You rent this for the year," Gardner explained.

Gardner said in an effort to continue cutting costs for parents, some classes have opted not to renew physical textbooks and instead utilize online tools. Principal Mike Schimpf added he is continuing to take cost-cutting measures to ensure there is not an additional burden on parents.

Ricketts said while the Wi-Fi capabilities are not currently up to speed, South Putnam has been laying the groundwork for the last few years. The implementation of 38 more access points over the summer should have the wireless Internet at its full capabilities.

Gardner added when surveying students and teachers, many requested the use of a touch screen. Math and science teachers most prominently requested the touch screen capability, so a stylus could be used to illustrate problems. The metal hinges on the computer ensure the folding capabilities into tablet form will not quickly deteriorate.

Board member Angie Nichols voiced concern that students without Internet at home should not be "punished" because of their lack of access.

Gardner said while the Chromebooks are a web-enabled device, there are also offline capabilities to cater to the 13 percent of students who reported they do not have Internet availability at home. For example, when the device is being used offline, it will open the most recently used documents. When she attempted to use the device in offline mode, it allowed her to access a couple hundred of the latest documents she had used while online.

Another perk of the web-based device is students are not downloading applications and programs onto the hard drive, which will reduce the risk of hardware issues. But, there is also a USB drive so students can access files stored on their thumb drives.

Looking forward, Gardner reiterated the 1:1 initiative will roll out in the high school during the 2016-17 school year, followed by the middle school in the 2017-18 school year.

The elementary roll-out will be at a later date. Gardner said there are no specifics yet because the school plans to apply for grants.

Board member Anthony Heavin asked if implementing the laptops meant phasing out the desktops the school recently purchased for all of the classrooms.

Ricketts explained the desktop computers have necessary programs, such as connecting to the smart board or inputting information in the grade book.