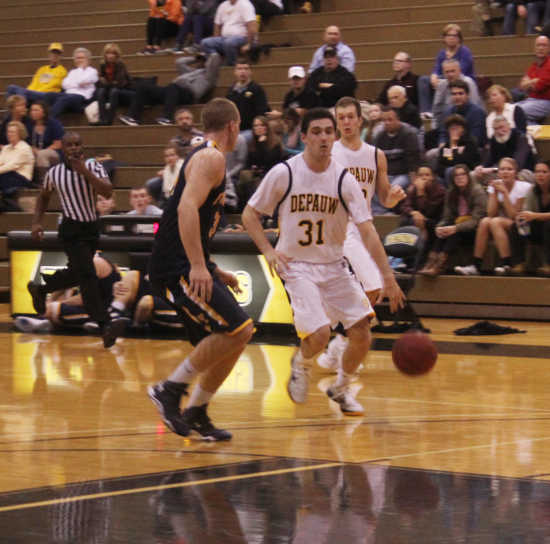 The season opener for the DePauw University men's basketball team yielded exciting results Tuesday night as the Tiger fans were treated to a thrilling DePauw victory over Franklin 84-79.

The Tigers went into halftime with just a one-point lead at 38-37. But DePauw Tigers got off to a hot start in second half, going on a 8-2 run but Franklin fight back into a 46-46 tie.

DePauw was able to attack the rim in the second half with guard Mason Hankins who then would kick it out to a jump shooter to knock down shots and keep up with Franklin scoring.

DePauw was down 58-56 before Clint Cunningham grabbed the offensive boards to tie the game.

Luke Lattner and Jack Vandermerkt then knocked down a few shots off turnovers for DePauw. They had 27 and 15 points respectively.

David Vogel also earned a layup after the turnover and with a Brad Fey jump shot DePauw had pulled into a 68-61 lead with eight minutes to play.

DePauw continued to attack the rim but Franklin was able to score in a variety keeping the pressure on DePauw.

Up 76-74, the Tigers grabbed two offensive rebounds before Cunningham scored on the putback with 48 seconds to go.

DPU then played good defense and earned the ball back, forcing Franklin to foul Lattner who knocked down the clutch foul shots making the score 81-76 Tigers.

It was then the DePauw defense that earned the win and the Tigers flew around to make the Grizzly shooters uncomfortable as Franklin put up three shots missing all three. DPU was able to walk away with the victory by hitting foul shots.

DePauw will next play at the Lopata Classic in St. Louis on Friday and Saturday.