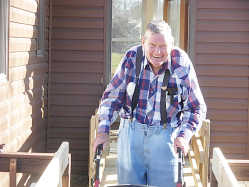 Leon Tippin of Bainbridge, recipient of the final SAWs ramp of the 2015 season, takes advantage of his newfound freedom. (Courtesy of SAWs)

SAWs, the mission of the Greencastle Presbyterian Church that provides handicap ramps, steps and safety railings to the financially challenged, completed the 2015 build season on Saturday, Nov. 7.

The significant highlight of this year's season was the 100th ramp being built by SAWs since the 2009 start of the mission.

After the 100th, 15 additional ramps were completed by the end of the season to bring the total to 115. SAWs has already had requests for next year and looks forward to the 2016 season that will start in March depending upon the weather.

If you or a friend is in need of help in accessing your home contact SAWs at 653-5713 or email churchoffice@cinergymetro.net or find them on facebook at www.facebook.com/SAWSGreencastle

Qualified persons can receive a ramp, low-rise steps or safety rails at no cost from SAWs, so call as soon as possible to get on the list for 2016.

As they finish the seventh year of the SAWs Mission, organizers would like to thank the Putnam County Community Foundation, Headley Hardware, the Greencastle Eagles FOE 4388, First National Bank, Putnam County Senior Center, Stardust Hills Homeowners Association, the WILL Center, Greencastle Presbyterian Church, the Smock Foundation, Greencastle Christian Church and all the other citizens and business organizations that have supported SAWs in 2015.

Support from the members of the community is vital to the future success of SAWs. Without this help the work of SAWs cannot continue.

Every dollar received by SAWs is used to help those that have difficulties accessing their homes. For this reason SAWs is again requesting the continued support of the community in 2016.