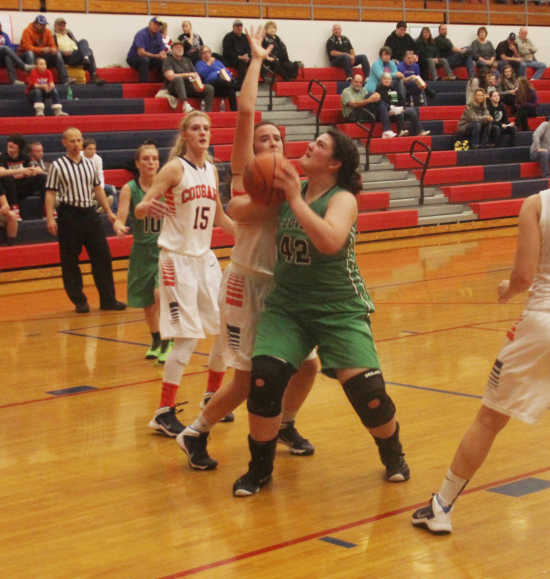 The North Putnam girls' basketball team came out and competed in its consolation game against Cloverdale Saturday without its center Taylor Nauert who went out early Friday with an ankle sprain.

The Clovers, however, stood tall and used a strong defensive fourth quarter to earn its first victory of the season, 44-29

"We were too complacent at the beginning of the game," Cougar coach Kevin Corsaro said. "We didn't come out and attack their zone. Then we came back. We had a little trouble. (Cloverdale) had a good game plan. They packed it in and were daring us to shoot it and we didn't shoot it too well."

Cloverdale made four threes in the first period, two from Payton Dorsett who finished the game with 12 and CHS was able to hold the Cougars to just 12 in the first and four in the second.

"It was a big confidence booster to get that first win," CHS coach Matt Langdon said. "Right off the tip we didn't look like an 0-4 team. We came out with some confidence. When shots were there, we shot them. We didn't second-guess ourselves. So that was nice to get a couple of baskets early."

Langdon said the biggest difference in the game Saturday was the Clovers' ability to move the ball up the court and take advantage of easier points when they were available.

"We got a ton of fastbreak points," Langdon said. "Even if we didn't get points on the fastbreak, we ended up getting a couple of passes out and got them into a little bit of foul trouble and got to the line a bit. You could tell, us pushing the ball affected the game."

North Putnam outscored CHS in the third and pulled closer to the Clovers with the score 32-15.

Shelby Suding was an active player earning shots and scoring 10 points to lead North Putnam. Millican also scored four of her six in the third and Aleah Duncan nailed a three-pointer.

"I have to do a better job," Corsaro said. "I told the girls in the locker room that this was all on me. I have to work harder. We've got to get by Tuesday and then hopefully we can get some practice time and we can actually work on something instead of trying to survive and get through games."

The Clovers however took back control in the fourth with Kelsey Helterbrand, Angela Pieper, Tori Combs and Dorsett each scoring a bucket while holding the Cougars to four points.

"We've got a good mesh this year," Langdon said. "Hopefully now that we have a win under our belt we can go and get that out of the way and we can go compete every game."